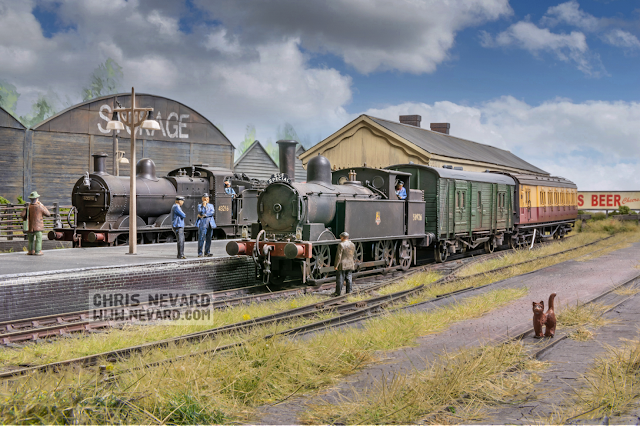 Sporting ‘express’ lamp head code configuration of a lamp over each buffer, the small train waits for the return of its camera toting passengers. They’re all lined up just out of shot either side of me taking almost identical photographs, because that’s the unwritten law of rail tour and photography charters. However celebrity photographer Ivan Locksmith on the extreme left, does his own thing, that’s why he gets his photography so widely published.

Derek and Deliberation Dave have been asked to pose stylishly in front of the former LNWR ‘coal tank’, the slow locomotive choice for this trip. On rail tours, especially of the photographic variety, fixed crew poses are hugely important, with Derek and Dave having to keep still for 6 minutes and 45 seconds to allow all the photographers to grab that identical image.

And finally, Bob Geeza Cat, loves to strut in style, so is in his element in front of the row of amateur photographers trying to outdo each other with who has the most expensive camera. Oh Bob you’re such a tart 🐾

A lot of work goes in to creation of this images, you can support me here at www.buymeacoffee.com/Nevardmedi3