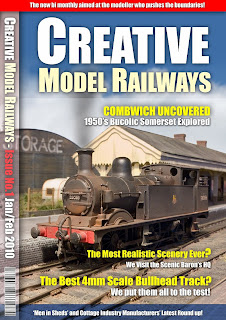 PLEASE NOTE THAT THIS IS A SPOOF!!! The result of too much time messing about in Photoshop and just an idle 'what if' bit of fun that would never survive in the real world . . . . .
We are lucky to be very well catered for with excellent model railway magazines in the UK, however this creative spurt of computer graphics has made me ponder my ideal magazine if I was to win the lottery ('cos there's no other way it would survive I guess).
My ficticious title 'Creative Model Railways' would concentrate very much on making things and pushing the boundaries to higher levels of realism than generally seen to date, whilst taking a more balanced approach to modelling the whole railway scene rather than concentrating on stock and track. The influence would be the likes of the delightful Voie Libre and Narrow Gauge & Industrial Review, two magazines that highlight only the very best and the innovative.
Reviews of general new products from the big manufacturers would not feature, after all they're already covered very well by the big four UK mags. I would however like to showcase the small suppliers and 'men in sheds' working in brass, white metal and resin not seen anywhere else in print.
Occasional 'How to' features would be aimed at showing modellers how to achieve advanced levels of realism from people highly qualified in their respective fields - with no snobbery! I've often felt that the higher up the ladder one goes, the more stuffy, cliquey, elderly and elitist things get - fun definately being very low in priority. Design would be friendly, full colour, bold, stylish and of course be printed on fabulous paper with top end repro! The stuffy old B&W only guard would hate it!
Then there would be the layouts, no filler tat at all, zilch! My focus given the choice, would be the smaller homegrown projects which are generally the creation of a single model maker (things designed by committee are never as good?). The magazine would not be era, gauge, scale or even country specific - but everything would need to inspire!!
It would not make a penny of course - but it wouldn't need to, it's just my pipe dream!
Posted by Chris Nevard Model Railways at 5:22 pm 6 comments:

A spotter’s dream as 37422 ‘Cardiff Canton’ rumbles past the fledgling heritage centre at Catcott Burtle with the thrice weekly Bicester to Burrowbridge MOD working.

Another dose of old tosh, in a vague attempt to justifiy a 2009 working on a 1950’s layout! I guess a FGW liveried Class 153 would look the part too? Imagine if the S&D had remained open as far as Glastonbury from Highbridge? Mid June would bring ‘Glasto’ charters of revellers from far and wide… we can dream on - that’s half the fun of this model train malarkey I guess!

Burrowbridge is a little known (imaginary actually) military establishment bought to the fore by fellow S&DJR modeller Tim Maddock’s Burrowbridge project a few miles south of Glastonbury. Take a look at Tim’s other work if you have time, it will be well worth it.

Posted by Chris Nevard Model Railways at 5:02 am No comments: 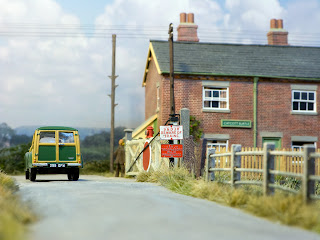 The bull: Trundling along the Nydon, a Morris Minor Traveller and the crossing at Catcott made a good subject for the photographer to test out his new 200mm Pentax Takumar telephoto lens mounted on his brand new and very fangled Pentax Spotmatic!

Reality: This afternoon it dawned on me that RAILEX is only 3 weeks away and that there’s still a bit of extra work to do on Catcott.

The warning signs are new, well actually borrowed from Combwich - they’re etched brass. Also a couple of areas missing fencing was addressed using bespoke Tim Maddocks’ mesh from last year’s RM Web jolly in Somerset (I’m not ruling out 2010 for Catcott if the event is repeated). The horizontal rodding on the bridge was replaced with brass - the previous plastic ones kept being broken due to resting cameras! All much tougher now! This shot is straight out of the camera under the layout’s own lighting.

Posted by Chris Nevard Model Railways at 10:03 am No comments: