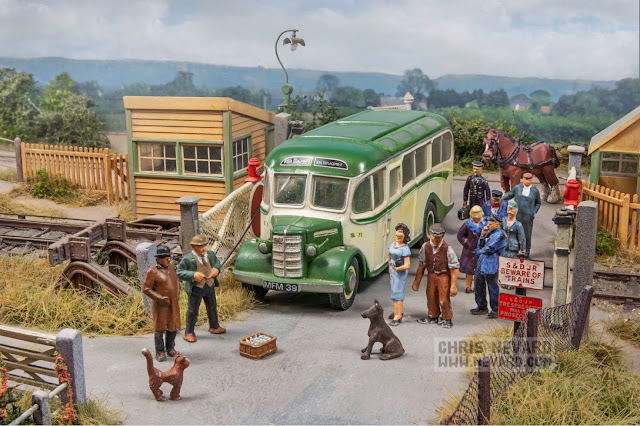 Few know that Barry Bullhead & Terry Tuttle-Thomas-Smythe also run an events business, mostly as another outlet to flog their illicit booze. It also works as a back up business should the less legal side of their empire get busted.
Before the rail strikes, they were going to hire a special train to run weekly ‘Murder on the Highbridge Express’ events for the more adventurous role playing inch high people. But sadly due to the aforementioned strikes, they’ve bought a tatty old Bedford OB bus and rebranded as ‘Murder on the Rail Replacement Bus Service’.
Many of our usual suspects are here, including Hubert the conversational Latin speak horse, though he might have to trot along behind. And of course, being a horse of course, he’ll always be able to pull the bus after it almost certainly breaks down. But more importantly, where is our favourite sweaty flasher-mac bus spotter Nasal Nigel? He’s at top of a telephone pole behind the camera, and through offering to press the shutter, hopes to be given a 10 by 8 inch colour print of this photograph to lick whilst fiddling with his new TT gauge Flying Scotsman.
And finally, moggy lovers will note Bob the geezer cat has appeared again, he loves to wind up Rufus hound. Such a naughty cat 🐾

You can show me your love of these regular post here www.buymeacoffee.com/Nevardmedi3

Posted by Chris Nevard Model Railways at 8:46 am