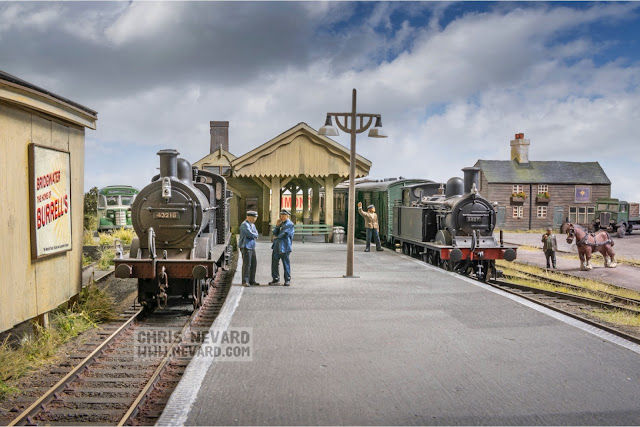 Saturday at Combwich. Dud and Deliberation Dave prior to hopping back on their loco, confirm that their flies (zipper for my colonial followers) are done up before then checking out each other’s attire. After all, they don’t want to be scaring any passengers with a rogue one-eyed trouser snake, that’s more Nasal Nigel’s thing.
Through the cab of the loco, Waving Wayne spots Harry the Hammer who as usual is at the end of his shift, along with Hubert the conversational Latin speaking horse standing in the yard. Wayne is always waving, he even waves in his sleep we are told by his mother Semaphore Sarah.
Not noticing Wayne, Harry and Hubert, before heading to The Star, watch the departure of the 12pm to Bridgwater. Today it’s formed of an elderly Johnson 1P 0-4-4 tank locomotive, a parcels van and an ex Southern Railway Maunsell brake composite coach in crimson and cream. Normally the coach on this service is an ancient ex Midland suburban carriage from the Victorian era smelling of urine and fungus, so todays passengers are in for a marginally better experience.
The streetlamp fanatics here, will no doubt be excited by the concrete lamp post of Southern Railway origin and its Art Deco inspired ceramic lanterns. The station is mostly lit by gas, however electric lighting is slowly being introduced, but at the current rate of progress gas will be around for a lot longer yet, this lamp being installed almost 20 years ago.
Bus spotters, I’m sure will have noticed the Bedford OB lurking on the far left. It’s very similar to the one seen a week of two ago being used for ‘Murder on the Rail Replacement Bus Service’ events. Actually it might even be the same bus. Today it’s forming the 12pm Combwich to Bridgwater bus service, duplicating the rail service here. All very ‘Titfield Thunderbolt’ I must say! Sensing foul play here, I’ve a hunch Barry Bullhead and Terry Tuttle-Thomas-Smythe are involved.
~~~~~🚂~~~~~
And finally, if you enjoy these posts, please support me at www.buymeacoffee.com/Nevardmedi3
Posted by Chris Nevard Model Railways at 9:35 am