'Winston' photographed for my entry in the the 'Your Model Railway Forum' World Wide Wagon Tour on 23 January 2010. Catcott is stage 4 of a tour of one of many layouts on route and will culminate at the Kernow Model Railway Exhibition 4&5th September 2010.

Fingers crossed the various postal services will allow this wonderful tour to complete! And yes, that is me driving it (aided with Photoshop) - for a bigger version of the photo above click here!

Posted by Chris Nevard Model Railways at 9:27 am No comments:

The move finally went to plan and the model railways have been coming out of 'Big Yellow' storage in dribs and drabs. Here is some of the collection housed in the smallest of the bedrooms temporarily whilst I ponder on demolishing the monstrosity of a concrete pre-fab garage and building a new bespoke wooden garage/railway room.

Posted by Chris Nevard Model Railways at 9:40 am 1 comment: 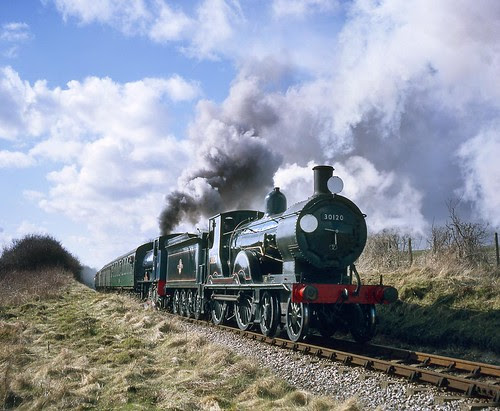 Back to the mid 1980's photography was simple and technology was not running away with itself. In those days it was what you put in the camera that counted, that and a degree of skill - no review screen in those days! This shot I recall at the time was to test out some new all singing & dancing Agfachrome 100 that had just appeared as a faster rival to the long lived 50 asa (iso) CT18. The camera, a late 1950's Rolleicord 5a twin lens reflex.

I didn't use the Agfachrome again, the result being a little muddy compared to Ektachrome and the new in your face Fujichrome RDP 100 that had just come onto the market. Still, with relatively inexpensive medium format scanners and a touch of photoshop we can now compensate for the film's possible shortcomings.

Posted by Chris Nevard Model Railways at 5:15 am No comments:

With an impending move to a new house, I thought it best to avoid having the removal company having anything to do with the model railways. To get around this I've hired storage at Big Yellow so the layouts can be out of harm's way on the move day. I can then pick them up at my leisure after we've settled in (OK, the following day!).

Here's the beast that is Cement Quay riding in luxury down the corridors of Big Yellow. I could do with one of these trollies when taking a layout to an exhibition!

Posted by Chris Nevard Model Railways at 2:51 am 3 comments: