The unit here is a 'cut and shove' from a Lima 2 car unit in the early 1980's. Recently a Black Beetle power unit replaced the time expired Lima pancake unit. The chassis needs a little work to straighten it out!

The real W55033 now lives on the Colne Valley Railway.

Posted by Chris Nevard Model Railways at 12:22 pm No comments:

Elderly Airfix gets a fix!

Recently I inherited a dozen or so mineral wagons made up from 1960's vintage Airfix kits. Whilst they were very well made, the builder never painted them but did add the transfers. In an attempt to bring them up to modern expectations but without the additional work of stripping all the transfers off I decided to weather them as I do my buildings. When performing this, I drybrush on various greys, rust reds and then dust on grey primer and matt black from Halfords aerosols. An effective and quick fix - just another 10 or so to do!

Posted by Chris Nevard Model Railways at 9:26 pm No comments:

The bull: With Driver Bearton in charge, Virgin Class 57 No. 57307 'Lady Penelope' is captured passing through the 'heritage station' of Catcott Burtle with a Westbury to Moorswater cement working.

The model: a Bachmann Class 57, the layout is my 'could have been' 1950/60's depiction of the rural Somerset Levels.

The Pug and the Chummy

Radstock's 'Pug' No 51202 made a very unusual appearance shunting the sidings at Catcott Burtle one bright Tuesday in September 1952.

The 'Pug' which is a 2004 vintage Hornby offering was picked up on Ebay back in the summer. I have added additional detail, a repaint, renumber and weathering. Much to my surprise it is a delightful runner. Opening out the wheel back-to-backs to just under 15mm have minimised any tendency to waddle and allow the little loco to negotiate C&L pointwork with no problems. Prototypically, the overall look is quite close, the thickness of the cab apertures are probably the weakest link.

The Austin 7 is from a Springside kit.

The motor protrudes into the cab, so to disguise this, a cloth screen from painted tissue has been added. Screens like this were an occasional feature on the real thing.
Posted by Chris Nevard Model Railways at 3:29 pm No comments:

The reality: this is just an excuse for another shot of my re-chassied and detailed up 1981 vintage Airfix Midland 4F as it is captured sliding across into the short siding at Catcott Burtle.

The bull: Midland 4F No. 44417 became the subject for well known SDJR photographer Ivan Locksmith to test out some Ektrachrome X on his new Planar lensed Rolleiflex f3.5. The location is Catcott Burtle and the date is 21 August 1961.

Posted by Chris Nevard Model Railways at 5:51 pm No comments:

Templecombe's Midland 4F No. 44417 is captured here trundling through Catcott Burtle with what I imagine is an Evercreech Junction to Highbridge goods. The slide mount on the colour transparency would suggest that the Kodachrome II slide was captured on the photographer's new Voigtländer Vitomatic II in the late summer of 1963. Has anyone any further thoughts on this?

Posted by Chris Nevard Model Railways at 12:46 am No comments:

Well, Cement Quay and its new 'mini me' survived it first outing in extending form at the excellent Wycrail. Not only is the layout 60% bigger it's also higher (4ft 3") - it now sharing Catcott Burtle's legs and drape, which I hope improved the experience for viewer.

Just after the doors opened, some weird electrical fault cause total failure for a minute or two, I think this may have been caused by me snagging the wiring loom whilst rather hastily shoving the dustbin liner cocooned layout into the car during a rain storm on Friday night. A grope of the wiring to ensure that maybe a couple of droppers weren't touching and shorting appeared to solve the problem (I have a 1978 MGB with Lucas/Prince of Darkness electrics so I'm used to groping electrics in a mindless way to get a result).

Ergonomically the layout really is too big to use the original control panel on one end which was OK for a layout which in its original form was just over 5 feet long. I'm tempted to simply go back to manual under baseboard push pull point control using rods which is simple to work and easy to fix. The same will be said of the Spratt and Winkles, whilst they uncouple when you want them to, they also do the same thing when you don't. Additionally the hook tends to get in the way and bind with loco buffer beam detail and cause the odd derailment when going over a crossover. So, back to three links in due course I fear - they're bullet proof and so easy to install (I'm still 3 link with all my steam stock and it's going to remain that way).

I still need to sort out the lighting on the extension, it doesn't match the main section despite same scenic colours and illumination. The problem lies with the bulb positioning which I'll address in due course.

Picture above: next outing will be steam/early diesel (not forever) - I favour the idea of and evolving layout to keep things fresh.

Just when we think we've caught up with European ready to run.....

nevard_091107_cq-wycrail-brawa_IMG_5949_web, originally uploaded by nevardmedia.
Just when we think we’ve caught up with European ready to run they’ve already jumped to the next stage……..

OK, I probably beng a little unfair becuase things have moved on in leaps and bounds in recent years – well on the looks front at least. Where we are still very much behind, is running qualities with examples varying enormously between what should be identical locos – especially when it comes to steam outline and short wheelbase variety.

The simply stunning Brawa V15 shunting locomotive (Road no. V 15 2231, 2271) runs and good as it looks - the running being way and above anything that comes out of the big three in the UK.

I'm sure you'll agree that this little loco which looks very happy indeed on Cement Quay. It was borrowed from Model Rail regular Peter Marriott for a few minutes during Wycrail on Saturday 7 November 2009.

Cement Quay and its 'bit on the side', 'little bother', 'son of', big sister or whatever you want to call it hits the road this weekend for one day only in its extended format at the highly regarded Wycrail in High Wycombe.

Wycrail, the annual show of the High Wycombe and District Model Railway Society is held at the beginning of November at:

Posted by Chris Nevard Model Railways at 9:07 pm No comments: 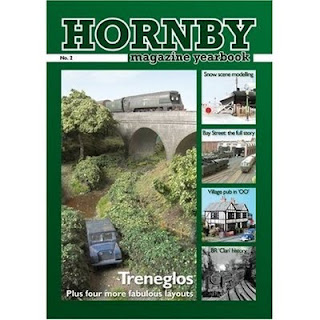 I've just obtained a copy this year's book and I'm amazed how busy Mike and his team have been (including a few snaps from me). I did know that Mike had been secretly building a new layout not seen in HM and had been out photographing other layouts - now I know what for!
Also unique to this book is further modelling inspiration, history and tips from Hornby Mag regulars James Lavery, Phil Parker and Evan Green-Hughes. All this is neatly printed on 127 pages of A4 format high quality paper (with great repro) and sandwiched inside solid glossy card cover.
http://www.amazon.co.uk/Hornby-Magazine-Yearbook-No-2/dp/0711034125
Posted by Chris Nevard Model Railways at 8:54 pm No comments:

Updating a quarter of a century old ready to run loco

1982 vintage Airfix Midland 4F 0-6-0. Repainted with Humbrol and finished with Krylon Matte Medium, detailed with lamp irons, separate handrails and renumbered as Bath Green Park's 44417 by Chris Nevard. The chassis and tender frames are Comet built by Philip Hall and are fully compensated, ditto on the tender whose weight bears on the rear dragbeam, with pickups on all wheels. The running quality is way beyond anything that could be achieved ready to run.

Posted by Chris Nevard Model Railways at 7:47 pm No comments: