All aboard the 2.15pm Service from Bleakhouse Road to Combwich! 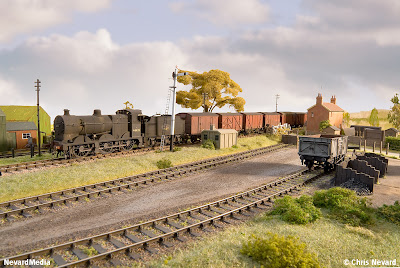 After several years of eager anticipation and discussion, the High Wycombe and District Model Railway Society have created a rare opportunity for this overdue pairing of railways to at last become reality - but only for one day!

On the day, the highlight will be the anticipated running of passenger and goods trains between Bleakhouse Road - Tim Maddocks' wonderful bucolic portrayal of the Somerset Levels and Combwich - Chris Nevard's web famous, but exhibition shy layout based on the banks of the River Parrett. 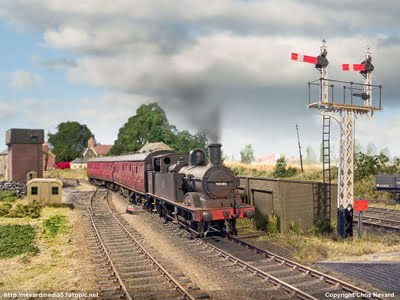 Both layouts have appeared in the model railway press on numerous occasions over the years. Although both fictitious interpretations of the real S&DJR, due to the ‘could have been’ nature of the projects Tim Maddocks and Chris Nevard frequently get communications via the internet from railway hungry web surfers asking more about the real locations. Chris only recently had an email from a chap in the real Combwich wondering if the railway actually ran through his garden!

To find out more:

Yesterday, I built up another conveyor from the scraps bin (Cornerstone left-overs) and some pipes (Pikestuff - err I think) - no idea what they do, won't lose any sleep over that....

Posted by Chris Nevard Model Railways at 6:34 pm No comments:

Cement Quay gets a Big Screen!

A slight departure from the original plan, I have decided to add another screen, this one might be for sand, who knows. It's unusual for a loading screen to be on a dead end siding, but it adds a little extra operational and visual interest maybe (there are now 2 screens in total)......

This one was knocked/scratched up on Wednesday evening in front the of the telly from a few plastic card odds and ends and bits left over from the Walthers cement works kit used on Cement Quay proper. It was painted yesterday morning using my usual mix of Halfords primers and emulsion washes (took about 45 mins in total). The pipe with tap on the side was added just because it looked pretty - maybe it's for beer? The conveyor is a kit again courtesy of Walthers (Model Junction - ta Sam Bennett for tracking this down). Both these structures need proper bedding in still.....
The 'water' still needs to be added to the wharf.

Posted by Chris Nevard Model Railways at 8:36 am No comments:

It's amazing what limiting ones time here on RM Web can do. Friday things were bare, but despite a busy weekend in the real world I managed to find a few hours to have a bash with a Grasmaster (the grass here scales out about bum height, in the high summer it can get alot higher than this) and get started with the scenic work. Lots to do yet, weeds, bushes, a proper disguise for the exit (pipes, bushes etc. ), water and maybe another loading screen to add a point of focus. I think it even works with steam motive power too in the form of good old 43017....
There are no computer graphics here - all 'as is' just photographed under single bulb in the ceiling (10 sec exposure on a Canon G9). The backsdrop is painted very simply with pale blue, greys and greens all mixed with the same pale blue used for the sky so to match in with Cement Quay proper. I think the lack of a sharp corner in the backscene is a bonus here.

Posted by Chris Nevard Model Railways at 12:04 am 1 comment:

Due to the depth of the Peco I decided to ballast the track first with some beach sand prior to applying the Humbrol Dry Clay.

I used tile grout rather that plaster - why? Because I had a tub in the garage. The bases of the spoil heaps which will be covered in real crushed limestone are cones of cardboard - they're seen here covered in grout and a wash of emulsion.

Much of the exposed rock will have grass (Silfor, Hanging basket liner and Noch Static Grass) and weeds covering it.

Although it's tricky to see it now, the arid moonscape seen here in due course will look like this shot of Cement Quay once treated http://www.nevardmedia5.fotopic.net/p55447178.html