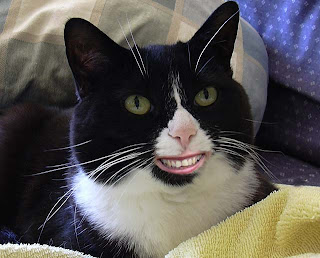 "Most of us would secretly quite like a model railway layout, especially when you see these attractive little scenes created by the railway photographer Chris Nevard."

The above from the Daily Telegraph Online took me a little by surprise, actually I'm quite chuffed, even though this temporary moment of glory is all about us Brits and our nutty hobbies. This of course means that I am officially a nutter. Still, I've known that for years, but now it's official!

Cheese Rolling is in the same feature too, and because that's something that no doubt makes all the wet health and safety limp wristed luny lefties twitch, this in my book is really quite cool - I'm honoured to be along side them!

The cat picture (Smudgie our human/feline clone) is purely here because I couldn't think of a picture to post.
Posted by Chris Nevard Model Railways at 9:36 am No comments:

Looks at my bush! 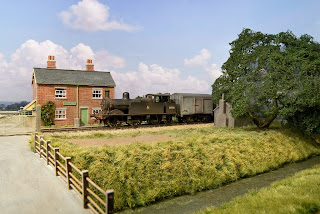 Bit of a bumper update for Catcott, with yesterday seeing a few trees finished off from copper wire originals.

Other growth (much still loose, just positioned for appraisal - only rear fixed so far), scatter coated seafoam, rubber nag's hair (what happens to the horse, is it still alive, dog food or a 'plat du jour' in Paris? Guess we'll never know, let's not think about it...) and some Heiki tree foliage. Re-coloured as per the trees. Have another cider.

Still much to do, should really sort out the gate targets, just working out how to get a really round (really round!) and clean mask when adding the white surrounds to the red centre. For the sceptics, everything you see here is 'as is', no sky photoshopperrrtrickerypoos......... It's interesting how the little Canon compact makes the backscene appear bluer over the more subtle Nikon DSLR. Of course one could match them with Photoshop, maybe when the layout is finished. Lots still to do....maybe another cider and some sleep first, there's no rush.........

Oh yes, forgot to say, added the climbing rose to the cottage.....

Want to find out more?

Posted by Chris Nevard Model Railways at 12:27 am 1 comment: 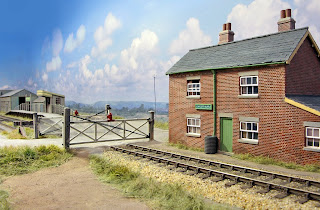 Catcott, 16 May 2008, added the hairy bits to the right hand side, a mix of hanging basket liner and Silfor, in turn colour adjusted with this odd greeny PVA mix I made up some years ago which has been used on both Arne Wharf and Cement Quay, stippled on with a 1 inch brush. Before setting, the fibres were brushed upwards with some L shaped tweezers. The grass was then finished off with a buff colour matt emulsion just on the tips of the blades. This way the Silfor and hanging basket liner blend quite well. Still some tidying up of stray hairs to do.

As per the real structure, there was a water butt, this is simply a tube of corrugated plasticard wrapped around 1/2" chopped off the end of a pencil after failing to find anything white metal at Expo EM today. In the event scratchbuilding only took a few minutes. One of the shots shows just how close the front of the cottage was to the running line (as was the real thing). There will be a little low fence from old sleepers in due course between the cottage and the railway and probably some other standard Exmouth Junction style sheds etc. 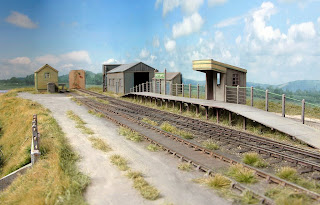 To replicate the very fine chicken wire on the gates, I dug out some gift wrapping ribbon (gauze with 0.5 mm holes), having decided that the supplied gauze was way to course (scale 6 inch holes, probably OK for gauge 1).

Still much to do, one of the bigger jobs being trees and some signals to protect the crossing. One will be a LSWR latice (bought today from Wizard Models at Expo EM), the other, a tall wooden S&D post maybe, like the one at Bason Bridge. The low relief shed will look better when the end has a bush there to hide the transition to backscene.

The muddy area in front of the cottage, will be a vegetable patch/allotment soon.
Posted by Chris Nevard Model Railways at 11:49 pm No comments: 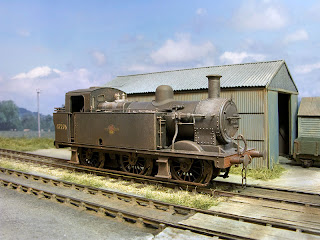 Another 24 hours, another snap, this time showing the beginnings of the grassy bits on the left hand side of the layout. There will be a bank of willow in front of the image with the telegraph pole in the distance to mask the Highbridge side of the layout's exit. The goods shed roof is still loose (and it shows too), pending that there will be some internal detail before being fixed into place. I could say that the reason for the shed's slight lilt to the right is because it's sinking into the bog, it's simply that it has not been bedded into the ground properly yet (I fix all my buildings to layouts - less things to pack up after a show and hopefully no gaps around the bases)................... 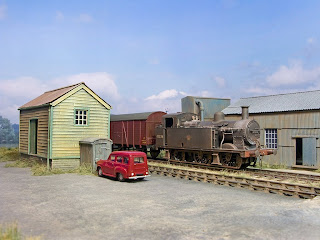 The loco is a weathered Bachmann one, renumbered to reflect one of Radstock's finest or worst, depend on your viewpoint. On the former S&DJR, these engines were mainly used as bankers, the 3 link rather than screw coupling being correct for this particular engine. They did make the odd sojourn down the Highbridge Branch from time to time.

The photographer's spanking new Austin A30 Countryman (Springside) contrasts well with wheezy LMS heap which is performing a spot of shunting (Parkside Dundas LMS CCT). The area just to the right of the car is likely to be a small coal dump.
Posted by Chris Nevard Model Railways at 2:36 am No comments: 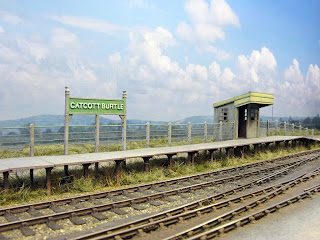 The pic to the left of Catcott Crossing Halt, shows the attack of the hanging basket liner earlier today. It will be trimmed, using small scissors and a vacuum cleaner to make it stand up. It will then be sprayed (a brush will be used upder the platform) very lightly with a highly diluted PVA/yellowy/browny/greeny emulsion mix using a toothbrush. Then, with an old vacuum cleaner it will be vacuumed again whilst wet to make sure the grass is still as upright as possible. The grass under the flatform will be left messy, the grass at the rear will be trimmed more so it looks less like the mower has been emptied. The glue/paint mix ultimately sets hard and stops the shreds of hanging basket liner breaking off and going everywhere it shouldn't.

The courser ballast is sand from the Solent strained through a fine sieve, something I've been using for years (Combwich). I did a test section the other night with some Green Scenes stuff but it didn't look right, it looking like old tea leaves in colour once dry. The beach sand is tiny pebbles, being almost round, the grains literally roll into place. It also takes PVA well too, in fact alot better than granite or whatever it is that the scenery suppliers give us.
Posted by Chris Nevard Model Railways at 4:30 pm No comments: 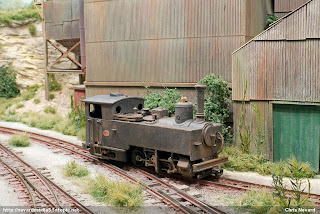 Having thoroughly enjoyed the feature by in a recent 009 Socielty Newsletter on how to anglicise the Bachmann Liliput HO Zillertal Bahn 2-6-2 a couple of months ago in 009 News, I remembered that I had one of these locomotives hidden in the garage collecting dust.

It was from one of those spur of the moment purchases a couple of years before, probably because I feared it was going out of production. 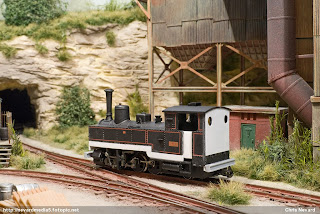 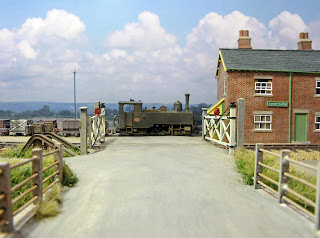 Whilst I’m not sure it looks totally British in style, it maybe could pass as something UK built for export to the colonies. My story is that it came back from war torn France after the Great War.

The loco, after a good couple of hours running round and round Arne Wharf (where it really looks the part I hasten to add), runs beautifully. The only problem is that due to the large overhand and my tight curves, most stock, irrespective of which way around the loco is facing, tends to get pulled off the rails on the bends! Oh well, better build another layout!
Posted by Chris Nevard Model Railways at 3:48 am No comments: