With Model Rail Live pending 17 & 18 September 2011, attention has gone back to Brewhouse Quay to get it ready with a little extra detail and such, and for once I'm not in a dreadful rush to complete this project in time.

The shot above which has a big nod to the late great micro layout genius Carl Arendt illustrates the bedding in of the base and capstan for rope shunting using a smudge of Das modelling clay and a spot of Super Glue.

The capstan manufactured from turned brass, was purchased from the very useful Cornwall Model Boats and is lurking here in primer with a plastic card base. It of course will be painted before some clever dick who has a mother with 'lovely hands' tells me it's the wrong colour.

The capstan is to aid rope shunting, which was one of the various ways that wagons were moved around in small yards like this - see this old post for more info on rope shunting and wagon turntables.

You'll be able to read more about Brewhouse Quay with a plethora of unpublished photos in Model Rail very shortly.

Posted by Chris Nevard Model Railways at 9:12 am No comments:

From a Parkside Dundas kit; a GWR Mink D used for stores and local movements around Bath seen here on Brewhouse Quay being pulled along the wharf road with a tractor. The driver has probably gone for a jar by the way...

Rather than go for 1950's carmine which was rather pushing history, I decided to turn it into the local stores runabout in grey (Halfords primer). Numbering still needs to be toned down a little  and I need to replace the rods between the brake levers at either end with some brass as I have already have between the V hanger wotsits in the middle - the supplied styrene rod is not really tough enough even for normal handling.

Note the Sentinel in the background - that is a modified Model Rail/Dapol Sentinel and this is a tease for a forthcoming article 'wot oi wrote' for the printed page.

Now you've got to the bottom of today's drivel, be sure to check out George Dent's blog - and by pure chance he has made up a cracking selection of stores van including a Minkypoos...
http://georgedentmodelmaker.blogspot.com/2011/07/ncb-stores-vans.html

Posted by Chris Nevard Model Railways at 11:50 pm No comments:

MIDFORD_PLAN_web, a photo by nevardmedia on Flickr.
This month's Model Rail is a SDJR special featuring 3 rather good SDJR layouts - 2 out of 3 of them having never been in print before either. It is of course right that 'Masterplan' should have a strong S&DJR flavour too with Midford as as a 'roundy-roundy', which with a little compromise would fit into the average garage or loft. To find out more about this special issue you'll need pick up a copy to find out more.


I can however reveal a little about my original idea which was designed as a long shelf layout that could go along a wall or exhibiton layout. So, rather than the original plan sitting on my hard drive shedding pixels, here it is for all to see.


Thinking about it, there is no reason why such a layout couldn't form part of a roundy roundy for exhibitions, but live on a shelf when at home. Whilst end to end fiddle yards would work, this part of the line was known for its long goods and passenger trains, something that would be a bit of a nightmare if one used cassettes because in OO they'd be getting on for 10 feet long and even in N gauge they'd be dangerously long!

Another thought could be to ignore the station and viaduct and have the goods yard as a separate 'micro', but then 10 carriage passenger and 30 wgaon good trains could look a little silly because they'd probably be longer that the layout. Of course one could always extend towards Bath and include Tucking Mill Viaduct.

To discuss the idea further, I have set up a thread on RMweb here - see you there?

Posted by Chris Nevard Model Railways at 9:11 pm No comments:

What Ever Happened to the Commentator?

I always find it amusing that model railway exhibitions are at sports centres – the type of people that ‘do sport’ are generally the complete opposite to railway enthusiasts. I suppose the advantage is that the exhibition organisers do not need to invest in too many signs or arrows announcing its presence (ideally painted onto an old stripped baseboard top with splodgy white lettering on lumpy SR green) pointing to the show. They simply rely on the plastic bag toting unfashionable non-sporty looking middle aged men to show the way (and they'll always be in 'that queue' 45 before the doors open). We've all met them, and they will have been to every show since the hall was built and most likely with the same Rumbelow's plastic bag that their mother gave to them in 1977 for their very first engine which would have been a Lima Deltic.

As I go in through the sports centre entrance, I normally hold my stomach in and head towards the pretty sporty receptionist in a way that hopefully will make her think that I’m going to ‘do sporty things’ rather than heading for the nerdy ‘fug’, then at the very last moment fork a speedy left behind a suitably large ‘rucksack’ heading for ‘Model Railway Exhibition’.

When exhibiting, we all know that ‘Rule Number 2’ (No.1 is ‘it’s my trainset...’) is to avoid eye contact with anyone suspect looking, this reduces the chance of being knobbled for anything up to an hour (and then regularly for the rest of the day because you're now their 'bezzy mate'). As revenge (often after such a knobbling) I like to pull faces at the weirdoes - it helps the day go faster, especially when bored of operating which is normally by about 10.03 on the Saturday morning. If when exhibiting you cannot see me, I'm probably behind the layout pulling a face at you because you smell, are socially challenged, have bad breath, or maybe simply just far too intense as you insist on showing me your sticky snot covered Triang Mk1 coach you paid £1.86 for. Frequently though all these traits go together.

And finally the real reason for this post, a question aimed at the more southerly exhibition goer; what ever happened to ‘The Commentator’? I have not seen him for ages and miss his wonderful voiceovers “Here comes an LMS 8F, 48660 was based at Bath Shed from 1962-64, it’s going over the points to pick up some wagons… oh dear it has derailed, I imagine a breakdown crane will be along in a minute”……

Posted by Chris Nevard Model Railways at 10:33 am 5 comments:

Email ThisBlogThis!Share to TwitterShare to FacebookShare to Pinterest
Labels: exhibitions

nevard_110625_BrewhouseQ_IMG_0275_webJPG, a photo by nevardmedia on Flickr.
This ancient 0-4-4 Midland 1P spent much of its working life on 'the Branch' of the old Somerset & Dorset Line. The pretty loco was withdrawn in 1959 and spent most of the following year next to the water softening plant at Bath Green Park shed awaiting removal - or so we were all led to believe!

In November 1960 the Marriott, Dent & Foster Brewery bought the locomotive to shunt its extensive quayside sidings because of of the directors was a railway buff. Then in 1968 when Courage took over the brewery, the loco was bought by an American investor and has since been a stuffed tiger at a railroad museum in Arkansas in the USA.

With the renewed interest in the former S&DJR becoming 'global' due to press hype in the British modelling and full sized railway press, it is hoped to repatriate to the engine to the UK for the fledgeling 'Moors Railway' project near the site of Edington Junction near Highbridge.


*this is a load of old tosh by the way!
Posted by Chris Nevard Model Railways at 10:41 am 2 comments: 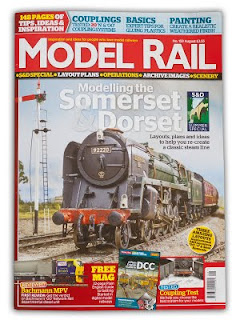 For fans of the SDJR this is is a real treat, featuring 3 wonderful SDJR layouts - 2 of them having never been in print before before.

Evercreech New is Julian Birley's stunning depiction of this much loved station in O gauge in he 1950's & 1960's era. The layout is so accurate that I was able to match some Ivo Peters photographs. The biggest problem I has was getting the camera low enough - 12 inch to the foot camera gear being a bit of a squeeze into this O gauge world!

Next up is Averton Hammer, Richard Knott's HUGE SDJR layout, though railway network would be more accurate description with trains running through a vast landscape featuring several much loved icons of S&DJR engineering. As with Evercreech New, the era is the popular 1950's & 1960's.

Thirdly we have Simon Challis' Cheddar, a pre-war period-piece 'could have been' depiction of the S&D station at Cheddar in P4. In contrast with the other two layouts the clock has been wound back to the era of Prussian Blue locomotives, passenger trains and colourful private owner wagons depicting some of the various companies that will be familiar to students of the S&DJR.

To accompany the layout, there are various feature to help steer prospective modellers of the S&D in the right direction to capturing the unique atmosphere which charmed so many and still does.

OK, enough waffle from me - here's the content listing....

Another old print from the archive

nevard_110708_BrehouseQ_1p_DSC_2784_BW, a photo by nevardmedia on Flickr.
Johnson 1P 0-4-4 No. 58086 eases a rake of vans between the hop store and the main brewhouse on Brewhouse Quay, summer 1957. It's thought that this photo was taken off the Bristol road bridge over the Avon - hence the elevated view.

The eagle eyed will notice the privately owned Sentinel parked next to the wagon turntable that leads to the bottling plant.

Here's a bigger scan of the above http://www.flickr.com/photos/nevardmedia/5914988354/sizes/l/in/photostream/
Posted by Chris Nevard Model Railways at 9:01 am No comments:

Photo of the Day

We all know it's a modified Hornby 8F on my rather wonky 30 year old Combwich, but let's just pretend it's the following.....

It's early September 1963, and our intrepid photographer Ivan Locksmith is firing off some Kodachome II  on his Leica M2 recording Bath Green Park's 8F No. 48660 shunting in the yard. These engines hardly ever worked over to Combwich, this turn normally being reserved for an ex-Midland 4F, an ex-GWR Collett 22xx or an Ivatt 2-6-2 2MT, so a very worthy subject for Ivan's camera especially seeing it looked like it was a nice day.

nevard_110630_cup_willow-la_DSC_2581_WEB, a photo by nevardmedia on Flickr.
On Thursday 30 June I had the pleasure of the company of Chris Perkins, Richard Lewis, Ian Chancellor and Tony Callaghan for a trip to the West Midlands to photograph full sized trains rather than models.

Much of the time was spent looking over railway bridge - the example above being a typical view for most of the day...

Here are the snaps:
Posted by Chris Nevard Model Railways at 9:21 am No comments: