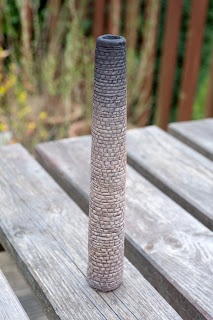 T minus just over 4 weeks, here is the state of play. Lots to do, for starters the pub needs a rear and the smelly pond needs something wet and smelling in it. Maybe I should wait until Railex and wring out one of the whiffers and drain it/him into the pond?

This shot, albeit very wide angle (18mm lens on a full frame DSLR) has not been messed about with. The backscene is a huge print, not some kind of post exposure manipulation which is all rather yawn these days...

The chimney, wasn't really needed, but old collieries had all sorts of physical redundant links with the past and I wanted to see what could be done with 4 sheets of A4 printer paper rolled up with plenty pf PVA into a cone, a layer of Das followed by a quick manipulate with various items more at home in the kitchen and then popped into the oven for 30 mins at 150 c to dry out the Das. It's far from perfect, pretty rough actually, but hopefully it works, and more importantly for me was a quick fix. All in all, apart from drying was around 2.5 hours work.
Posted by Chris Nevard Model Railways at 1:20 am No comments:

nevard_130418_PGCH_IMG_3501, a photo by nevardmedia on Flickr.
A couple more snaps of the trainset.....
Railex is just 5 weeks now and I've so much to do...
Things that probably wont be ready for Railex

nevard_130415_PGCH_IMG_3495, a photo by nevardmedia on Flickr.
Today the static grass came out, three layers (various makes) working from greens through to straw shades on top. The grass on the track will need a little trim - that's where a fresh disposable razor comes in - just draw it along the rail tops.

The first tree is in, it being salvaged from Polbrock. More will run along the rear in a random fashion along the lines of an over grown hedgerow, but without over crowding the scene, I like the feeling of space.

"An ex-L&YR 'Pug' propels a short rake of wagons up the gradient toward Polbrook Gurney Upper Pit. The Cornish engine can just be seen beyond the bridge.

I'll take you through the construction of this layout in Model Rail magazine, starting a new series from the May issue which is on sale from 18 April 2013.
Posted by Chris Nevard Model Railways at 11:08 pm 2 comments: 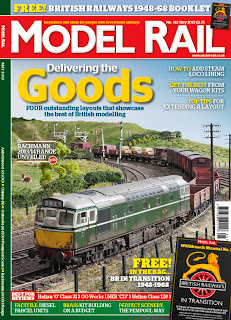 Featuring in this issue, out Thursday 18 April

WORKBENCH: Rebuilding a layout, Making the most of a Parkside Dundas wagon kit, How to paint lining, how to weather 'N' gauge stock in just 15 minutes, better 'N' gauge couplings, and more.

PLUS: Workbench Manual No. 7 – British Railways in Transition. A FREE 32-page look back at the 1948-68 era packed with superb archive photographs, background information and 'how to' articles.


Abbotswood (OO) late 1960's early 1970's junction based on a real location in Worcestershire where you'll be able to enjoy a good mix of 'heritage' diesel motive power and trains in green, maroon, blue & grey and other such period delights from this rarely modelled era. This super new layout which premiers in Model Rail is also featured on the cover.
Chinley (N), we wind the clock back to 1950's Derbyshire, to enjoy an exclusive first time viewing this extensive loft layout, again based on a real location. N gauge allows the capture of this well known Peak District station and environment to full effect with long passenger and goods trains in a big landscape.
Outon Road (OO), we re-visit this classy 1990's era layout to experience yet more of Cavan Millward's fine workmanship, which doesn't only involve extending the layout but also includes the addition of overhead catenary along with more of some of the best scenic modelling out there.
Pempoul (1/50), Maggie and Gordon Gravett's iconic and hugely popular French metre gauge layout will be known to many. But for the first time ever we undertook a proper controlled shoot under studio lighting conditions to gain another angle on this wonderful layout, whilst giving the builders a chance to reveal some of Pempoul's scenic secrets.
Workbench: Polbrook Gurney Colliery (OO), last year we followed Chris Nevard's build of 'Polbrock' a little known cosy Cornish outpost near Bodmin; this year we return to see the layout extended to included his Mendip Colliery project. There is no coal in Cornwall, so Polbrock has moved across to North Somerset, losing a 'c' and gaining and 'o' to become Polbrook Gurney. This installment heralds the first part of a short series on its construction which, will culminate with it being shown at Model Rail Live 21/22 September at Newark Showground. Find out more www.modelraillive.co.uk/

Posted by Chris Nevard Model Railways at 10:13 am No comments:

Polbrook Gurney Colliery Update - starting to look like a layout... 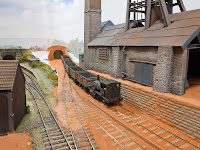 Been really busy today adding Das modelling clay to the lightweight colliery sidings. The clay is bright orange, so the power of Photoshop helps remove that aspect until I get around to painting it. But if you really want to see the the Sunny D look, click on the thumb to the right...

The difference between the heavier traditional British bullhead track in the foreground contrasts nicely with the light weight colliery flat bottomed rail sidings.

Lots more to do yet though! Railex is just a few weeks away....
Posted by Chris Nevard Model Railways at 12:49 am 4 comments: