A Tour Around Catcott Burtle

A few weeks ago, I was invited down to the studios of Model Railway TV in Arundel, Sussex to chat about Catcott Burtle and other aspects of this all consuming hobby. I wasn't expecting this to be online for a few weeks, so was quite surprised this morning to see the interview there. I think I'll be keeping the day job by the way - being more proficient behind the camera!

Link: Modelrailway TV
Posted by Chris Nevard Model Railways at 10:52 am No comments: 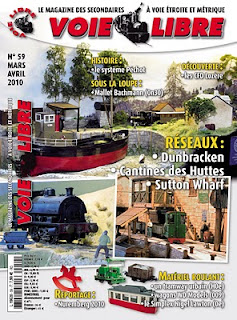 Lots of UK interest in this issue of Voie Libre one from the friendly narrow gauge LR Presse publishers in France. The editor, François Fontana is a regular at ExpoNG and hence the large amount of material to interest us.

All too often niche hobby publications are drab and look more like the parish news rather than a fun tool to promote a hobby. They frequently take themselves far too seriously and create a stuffy elitist image which is guaranteed to put new people off the hobby. By total contrast, Voie Libre is a happy bright magazine, with a strong welcoming graphic quality - the text, photographs, diagrams and tasteful use of coloured backgrounds gel together to produce a magazine that is hard to put down.

Illustrations; rather than being the common and often sterile computer generated variety are good old fashioned pen and ink performed with a wonderful artistic 'organic' style that just make you want to model them in 3D!

François, is without doubt a fabulous model maker, brilliant artist and cracking photographer - can there be a better combination? If that's not good enough, you can download an English translation from their website too!


Posted by Chris Nevard Model Railways at 1:03 am No comments: 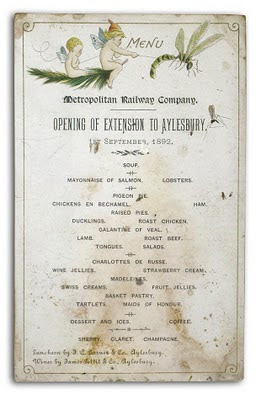 It's interesting what people used to eat in 1892 when pushing out the boat, or in this case opening a new railway line. Click to enlarge so it's readable!
Posted by Chris Nevard Model Railways at 9:10 am 2 comments: 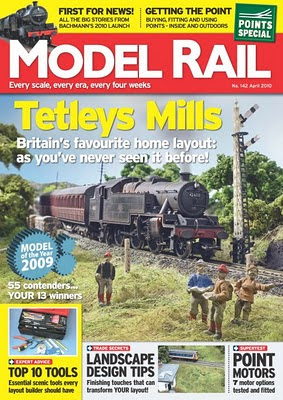 April 2010 Model Rail has hit the newsagents, and although I'm rather biased I do have to say that it is really rather good!

The content goes on forever with a plethora of really useful, inspiring, well written and illustrated features. The repro is top-notch too - something as a photographer I'm very very fussy about, and I can safely say that this aspect without doubt is a market leader in this area.

OK, enough waffle from me, here's the official release what's inside....

Posted by Chris Nevard Model Railways at 9:24 pm No comments:

A bit of messing about on Blurb 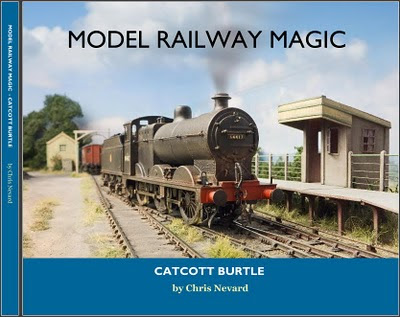 Blurb is a great way to mess about trying ideas out for a possible book.

I have been asked buy a publisher to come up with a model railway book idea, but to be honest I'm not quite sure where to start. Maybe something about scenics and some of the techniques used on my layouts?

In the mean time I'm messing about with some mock-ups I'm hoping will polarise the various thoughts I have. The joy of Blurb is that you can end up with a high quality printed book of whatever ideas one might have -

and the great thing is that it does not have to be the slightest bit commercial! The idea here is for a 10x8 inch landscape format book as a 'toe in the water' which could be sold via the website or at the occasional show I do.

Clicking on the images here will take you to a bigger picture.

With the change of regional boundaries and the operation of the former S&DJR route becoming under the control of the Western Region from 1958, ex GWR locomotives started to appear in place of Midland engines. Here we have Templecombe's ex GWR pannier tank No. 4691 as it prepares to leave Combwich with the 11.15am service to Templecombe on the 12th September 1961.

Posted by Chris Nevard Model Railways at 12:28 am No comments:

Back of an Envelope Fun 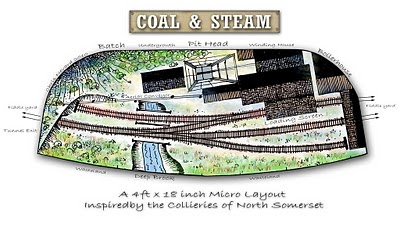 Right (click on) - another idea scribbled on the back of an envelope last night during a tea break which was then cleaned up in Photoshop over breakfast this morning. I could use Catcott's fiddle yards I guess. Having acquired several Bachmann Scenecraft seconds and some Skaledale stuff which could be bashed about a little mixed in with a dash of scratchbuilding, something could be hacked out quite quickly I guess.

The curved nature would be a break from the norm, with the tandem pointwork being a good focal point. Trackwork will all be done properly this time, either useing C&L as with Catcott or maybe even handbuilt using spiked code 55 flatbottomed as Brian Harrap has on his super Quai: 87 layout. Of course a mix of the two could aslo look good. 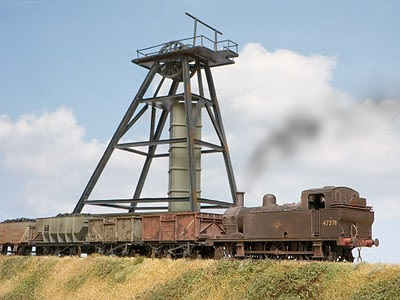 A diorama approach will work well with what could be quite a deep layout height wise, starting low at the front with the brook rising up by 18 inches on the left hand side with an old 'batch' (slag heap) balanced by colliery buildings on the right.

The two parallel lines crossing from the middle to the left hand side are a possible aerial cable way to remove waste - if that could be made to work that would be great fun. Additional fun and games could be had with actually loading wagons too via a hidden shoot from the rear of the layout down to the screen which is middle right.

The look I'm after is a cold winter's day (even though this sketch looks 'summer') inspired by the last days of steam at Writhlington on the old S&DJR. Wagon stock would be 99% open wagons and locos anything from a Sentinels, 'Bagnalls' (Jinty), Pugs and maybe even a Hymek - no hard rules!
Posted by Chris Nevard Model Railways at 7:39 pm No comments:

The Star public house on the quayside at Combwich. Ivan Locksmith's old Austin has certainly been getting around recently. Note the modern metal casks (carrying a keg beer called 'Tantivy') that make the elderly Austin look rather out of place - though of course in those pre MOT days it was quite common to see pre-war cars on the roads even in the 1960's.

Starkey Knight and Ford was a well known Tiverton and Bridgwater brewery which sadly became swallowed up by brewing giant Whitbread in the 1960's. Their beers started to be replaced with Whitbread ales from around 1966 in the pubs.

For any readers of this blog living in the real Combwich, please note that this is just a load of old bull, The Star is just a ficticious model - by contrast the brewery information is fact.

Posted by Chris Nevard Model Railways at 1:35 am No comments: 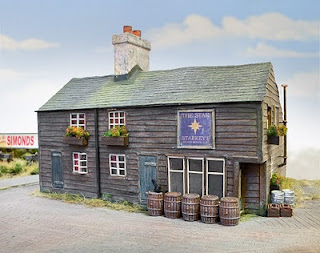 Posted by Chris Nevard Model Railways at 10:19 pm No comments:

Highbridge's final Midland 1P 58086 managed to avoid scrapping in 1959 and in fact ended up in private ownership pottering about with wagons in Old Quarry Wharf on the banks of the river Severn. Here is the old girl captured on Ivan Locksmith's Leica in September 1963.

Posted by Chris Nevard Model Railways at 1:05 am No comments: 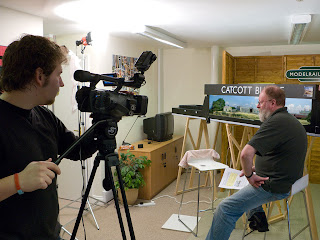 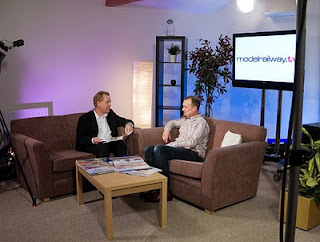 Keep an eye out for Catcott Burtle in Modelrailway.TV's run-down later this spring.
Posted by Chris Nevard Model Railways at 10:25 am No comments: