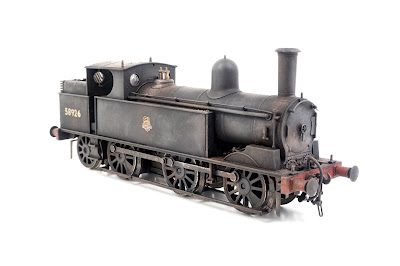 A little bit of loco tweaking last Monday. A Bachmann LNWR Webb Coal Tank renumbered and weathered (washes and dry brush, sealed under a top coat of Tamiya Matt). It was originally in LMS livery. The smokebox dart needs to be swapped out for a later type, as and when I find something. 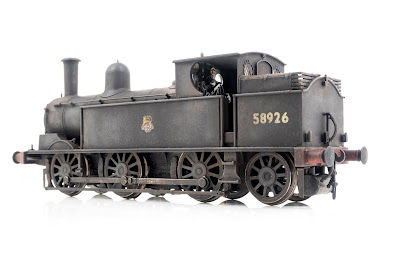 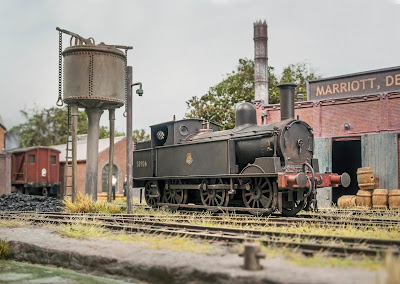 This useful little loco looks very at home on Brew Street. It's a very good runner too, ideal for a shunting layout this one.
Posted by Chris Nevard Model Railways at 7:30 am 2 comments: 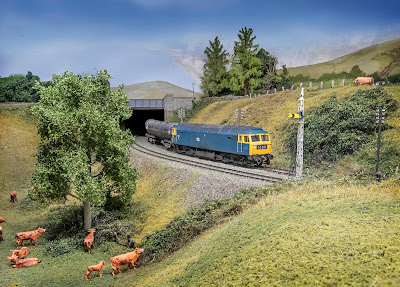 In December I was as a commercial job invited up to the Scottish Borders to give a Hazelbank a scenic up and under. The layout depicting a could have been scenerio on the Waverley Route is 21 x 15 feet - so 3 whole days were spent messing about with static grass and around 60 assorted trees. 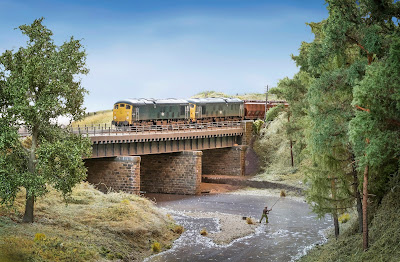 Left. This is a new view on Hazelbank, new trees add a whole new feel to the place - the model being a Scottish Borderland scenero.

In addition to trees and static grass, the the mountain river 'Gala Water' has been given a refresh too.

If you want to know more about Hazelbank (pre-refurbishment) follow this link www.sdeg.co.uk/layout-information

Drop me a line if you have a layout that needs a bit of TLC
Posted by Chris Nevard Model Railways at 12:01 pm 1 comment:

Layout in a Box!

Apologies for the lack of posts here, I've been rather busy with photographic shoots for Model Rail magazine and more recently a few commercial model making commissions. Drop me a line

Enough of that, back in the autumn I was approached to build a layout in a box. I must admit to not really looking at plastic storage boxes to house a layout until then, but the owner needed to be able to store the layout under a bed or on-end in a cupboard when not in use.

Everything had  to be completely self contained in a foot print of 80 x 30cm - and being a fan and serial builder or micro layouts, I enjoy the challenge to see what can be squeezed in, whilst still creating a believable scenario so this was right up me street.

The scenario to be depicted was that of the early days on the Bluebell Railway, featuring a truncated railway halt for brake van rides - Freshfield Halt being some of the inspiration with the line running through a shallow cutting.

If you enjoy these daily post, feel free to buy me a bev  https://www.buymeacoffee.com/Nevardmedi3
Posted by Chris Nevard Model Railways at 11:40 am 9 comments: