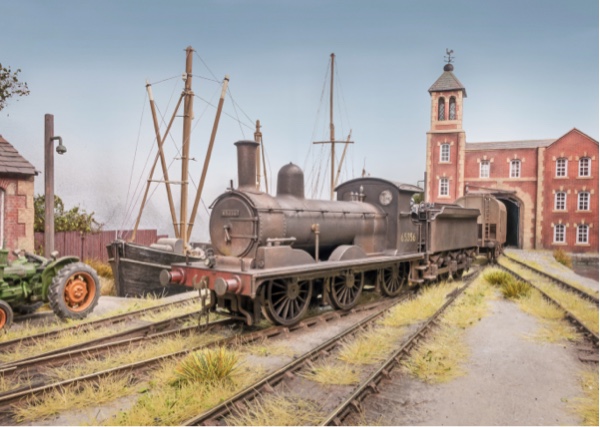 As always, click on the fuzzy photo above for a bigger view - a really big view in fact because I'm too lazy to resize the original file.

I've had this little loco sitting in a box for some time, one of the reasons being that I tend to model the former Western Region of British Railways. This delightful little engine was very much an animal of the former Great Eastern Railway which served Essex, Suffolk and Norfolk.

Brew Street's recent extension has sort of given it an East Anglian backwater feel, so ideal for such a little loco which to my eyes has a very high cute factor, rather like that of a dopey puppy with big eyes. The heavily tweeked Metcalfe Factory building in the background of the above photo with the railway running through it, is a little like the entrance to Snape Wharf in Suffolk too.

I've not weathered up a loco for a while, having been building layouts, so this made a nice little Sunday afternoon project. I also added scale couplings, a crew, real coal and some of the iron mongery used by the hard working fireman. The particular loco was a goods only engine, hence 3 links rather than the more common screw type.

The result here took around 4 hours sitting outside in the late summer/early autumn sun with a nice cold beer.

I brush weather these days, preferring the slightly more organic look it gives over airbrush, feeling that a lot of airbrushed weathering can look very similar and sterile. I've never been one to follow the pack though, preferring to make my own look rather than generic - for good or bad.

I'm very keen on interior matt emulsion match pots, if only to wind up the overly serious element of the hobby who insist on bespoke pigments hand made by 129 year old hobbits in some hidden cave in a very remote part of Wales (only available through a tiny classified ad in the MRJ). I digress, but do check out those miserable baby poo browns and manic depressive greys - do people really decorate with those? Being an old fart, I'm still a great fan Humbrol or Revell enamel - again, various dull and depressing colours and 'metal coat' for that oily sheen - a must have, learnt from the military kids. Everything is finally finished off with a spray of Tamiya Matt - another must have.

I'm taking Brew Street and Fountain Colliery (joined at the hip, East Anglia meets Forest of Dean) to Wycrail on Saturday 4th of November should anybody wish to poke some fun at me and the trainsets.

Posted by Chris Nevard Model Railways at 8:12 am 1 comment: 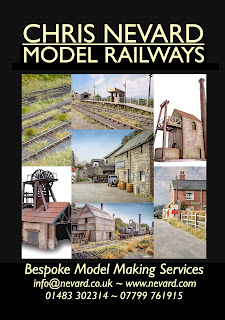 I regularly get requests as to whether I can undertake model making commissions .... so, with a deep breath I have decided to take on a limited amount of work.

You might have that stalled project that needs finishing off, or you you may simply have a model railway* that needs a refresh. Maybe you have some kits to complete or some buildings that are needed on your layout, etc etc....

I'm based in the Surrey area of the UK

See the photo on the right for my contact details

* Please note that I can only undertake third party location work in and around the south east. Smaller layouts, I will work on in my own workshop - the layout owner will be responsible for delivery and collection.
Posted by Chris Nevard Model Railways at 2:48 pm 3 comments: 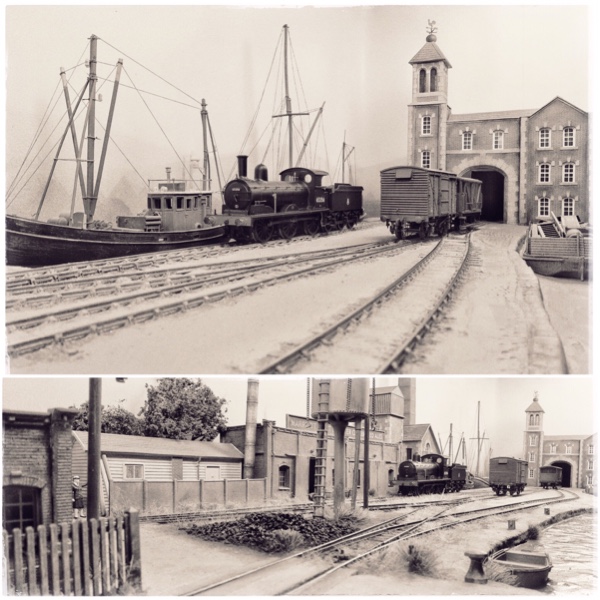 Brew Street update. Starting to look like a layout with the J15 looking very at home here. It's ex-box, so will need renumbering and grubbing up a little.

Nothing is fixed down, so apologies for the wonky bits.

Could this be Somewhere on the Suffolk coast?

Monochrome edit to hide the bright orange clay. I'll paint it shortly. Work in progress, with much still to do...

Posted by Chris Nevard Model Railways at 9:29 am 2 comments:

Point of No Return 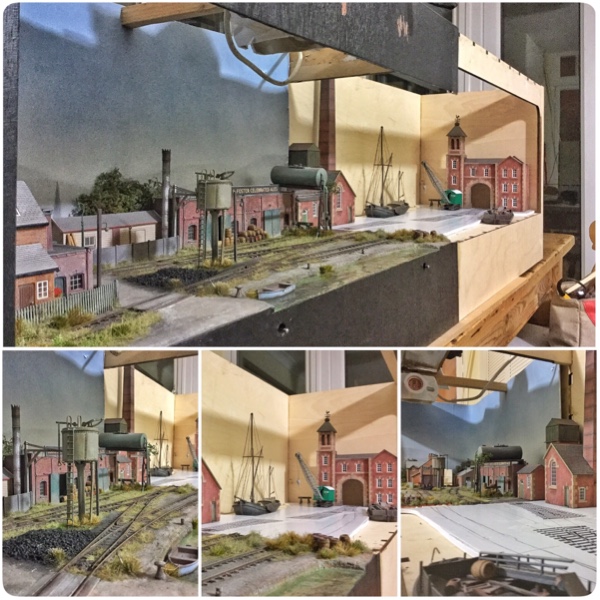 Extending Brew Street from its original 2 x 1 feet to a whopping 4 x 1 - I think I've reached the point of no return.

In its original format, I could never see me taking it to a show. I'd have been pulling my own teeth out after 15 mins. I might last up to an hour after the extension. Operation isn't really my thing. If I didn't do the odd show I wouldn't even wire them up. 😱

The right hand side will feature a larger canal wharf with a few boats exiting through a heavily embellished Metcalfe factory entrance. Sort of Snape Quay/malting like. Just had to be done with that arch!


I was asked to do the Metcalfe factory for a magazine feature, but it's silly it gathering dust with no home. The original concept of Brew Street was designed to use spare buildings and other clutter up, whilst having a bit of freelance fun, so this will carry that on.

I need to finish this within 4 weeks to make way for commercial stuff. All going well I'll be linking it to Fountain Colliery at Wycrail first Saturday of November. 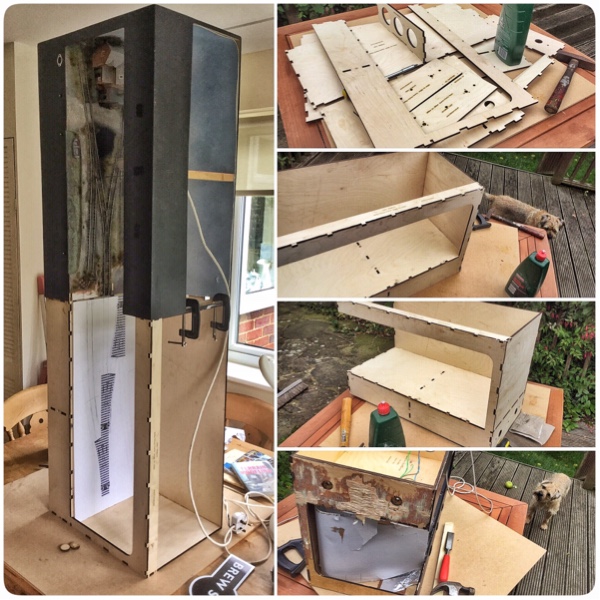 Posted by Chris Nevard Model Railways at 9:35 am 3 comments: 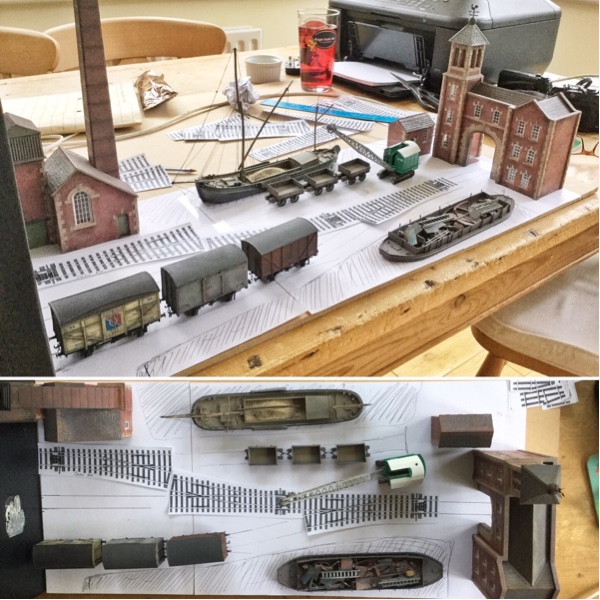 A little messing about to possibly extend Brew Street. And in anticipation I've ordered another diorama case from www.timhorn.co.uk to match Brew Street's, however a little carpentry will be required to turn it in to one big case - a mammoth 4 x 1 feet in total!

Brew Street, built last Autumn over 2 weeks was a spontaneous project using up spare bits and bobs, so this carries on that theme. In the past I've built quite a few serious projects (handmade everything including track), but from time to time it's fun to do a quickie.

When planning layouts I like to do mock ups using structures and templates, a pleasing composition is important to me, especially due to the fact that photography plays an important roll in displaying and sharing the layout to a wider audience. I'm not a huge fan of exhibiting, more often than not I'm performing with my band at weekends (my other interest).

I have to get this one finished by mid October to make way from some new commercial modelling projects, a business area I'm slowly moving in to as part of a lifestyle change away from the rat race. The book is filling up.

Posted by Chris Nevard Model Railways at 8:05 am No comments: 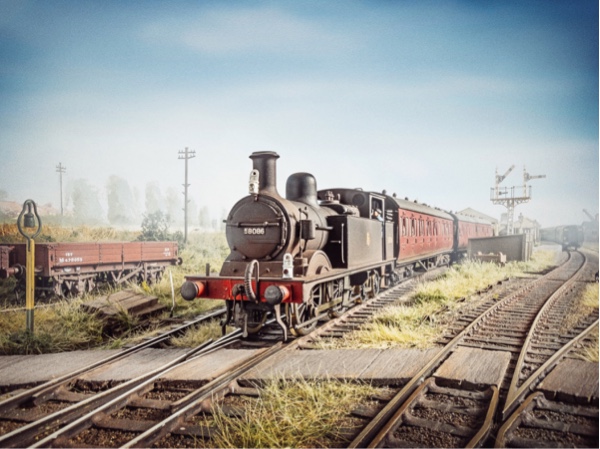 60 years ago today, Johnson 1P No. 58086 departs Combwich through an early morning late summer mist. This loco sadly was withdrawn just 2 years later. What a shame none survived in to preservation.

The model is one of the very few brass kits I've built, this one being by the Craftsman range. It has January 1982 scratched on to the underside.

I believe one of the ready to run manufacturers has one planned for the future, which will no doubt make this model look rather crude. This will run better though, I had the chassis commercially rebuilt for me by a 'man who can' a few years ago, and now it runs a dream all day long.

Click on the above photo for a bigger version.

Posted by Chris Nevard Model Railways at 9:15 am No comments: 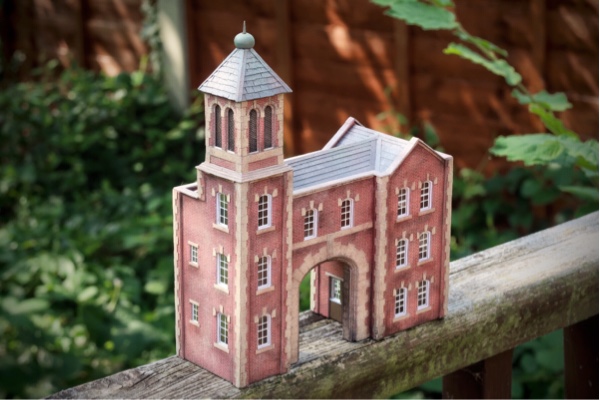 I've been asked to 'enhance' a Metcalfe printed card kit. Mostly involves adding card overlays to formerly printed detail along with a slap of paint. I hold my hand up to the quoins not being quite right. The water tower and chimney buildings have yet to be treated, hopefully a job for this weekend.
The 'olive', on the top of the tower will be replaced with a weather vane when I source or fabricate one.

Click on the photos above and below for a much bigger version... 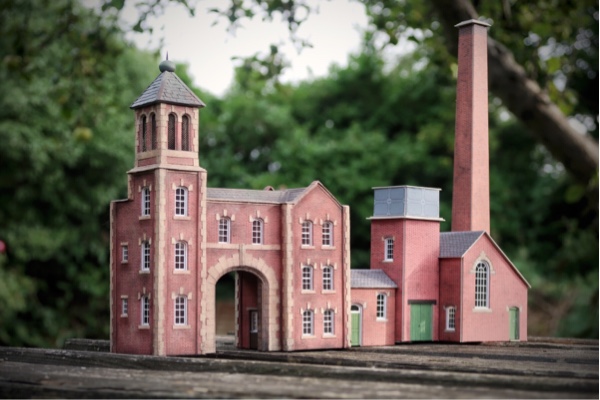 Posted by Chris Nevard Model Railways at 8:51 am 3 comments: