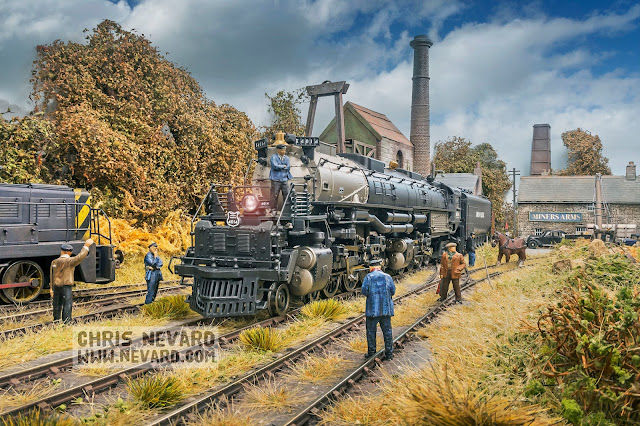 It’s that loco again, which somehow or other has crossed the Atlantic and appeared deep in The Forest of Dean at the sidings of a little known colliery.

Many of our regulars have left the comfort of the Miners Arms pub to take in the incredible sight. It’s thought that the management have been on that fangled ’interweb thing’ splashing the cash on yet another unsuitable but never the less magnificent shunting loco.

From left to right… Waving Wayne waves the loco through, he always gets the waving job, ‘cos that’s what he does best. Deliberation Dave is counting the wheels, but he’s struggling after his 7 pints at the pub, so will shortly give up counting and record the number as ‘probably more than 10’.

Pete’s standing on the loco being photographed by Dud with his back to us. He wants the photograph for an advert in the lonely hearts section of The Freeminer & Tree Hugger’s Gazette - a popular periodical with nature loving lonely single late middle aged men with coal under their fingernails in the Forest. The resulting photograph will indicate to any possible suitors that he has a ‘big one’, though of course as we know with big car drivers, it’s usually quite the opposite.

Freddy the Flag, clutches his red warning flag, but has decided not to bother waving it in this instance, because it’s pretty obvious that while the engine is a potential hazard, if you didn’t see it coming you’re probably best left to the powers of natural selection anyway.

Everyone’s favourite, Hubert the conversational Latin speaking horse is struggling to find suitable Latin to describe such a magnificent steamy beast, for the Romans didn’t have steam locomotives as far as I’m aware. Though I’m sure one or two of the many fluent Latin conversationalists here will be able to smugly advise Hubert.

And finally, if you enjoy these posts, please support me at www.buymeacoffee.com/Nevardmedi3