Just a bit of messing about to see what could be plonked on a sheet of 3'00" x 1'00". 'Carters' Siding was a clay pit off the truncated Corfe Mullen to Wimborne line on the former S&D, the route being severed in 1933.
The remaining 1 mile long siding from Corfe Mullen Junction served the clay pits until 1959, and then wagon storage until 1965 - the rails finally being lifted in 1968.
This quicky was knocked up in MS Paint, in reality it will be on a curve (which is rather beyond MS Paint). The truncated line ends on the left. The bridge on the right could be double track width with a new extra portal for the siding. The narrow gauge will be around 3 inches higher than the standard gauge siding on the ofreground.
In reality AFIK there was no loop, the loop here is just to jazz it up a tad. As I say, this is only a bit of armchair pontification (but so was Catcott)!

Update: Wednesday 31 Dec
Through photography eyes, the main gripe I have with this one is the double track +1 (for the siding which will be an additional 'later' portal) is that the cassette yard will be too visible through the bridge on the right. This common problem is noticed when photographing layouts - mirrors can take care of that for snaps but tend to get in the way of moving trains!
Since toying about yesterday, this has come to fruition of Carter's Siding (proper name was Corfe Mullen Siding) courtesy of that Google thing...http://www.trainweb.org/railwest/railco/sdjr/cmj.html#CMS
The siding was only long enough for 5 wagons which is great for us, but sadly no loop. If I wanted an accurate rendition, because the end of the line was to the left, trains had to run past, then shunt back into the siding - this means I'd need around 4 to 5 feet length which defeats the object of this project.
The sketch book is out again for some more armchair pontification, with this morning's below....
Another thought is a 3 foot module to join up to Catcott's right hand side (or stand alone using Catcott's fiddle yards) allowing trains to run right through, this time featuring the 'Eclipse Peat Works'. This could be interesting in that the narrow gauge feeder ran over the standard gauge http://www.sdjr.net/locations/ashcott.html , then over the canal which by this stage was on the opposite side of the line from Catcott over to a series of corrugated huts for the peat works. Narrow gauge wagons went up some kind of rickety wooden structure to load their content into wagons on the single standard gauge siding. Modelling something like this would be interesting too http://www.british-history.ac.uk/image.aspx?compid=15115&filename=fig57.gif&pubid=62
Whatever happens (if ever) presentation with be the usual black box 'house style' with built in lighting and curved backscene so as to blend in with existing projects...
Posted by Chris Nevard Model Railways at 3:34 pm No comments: 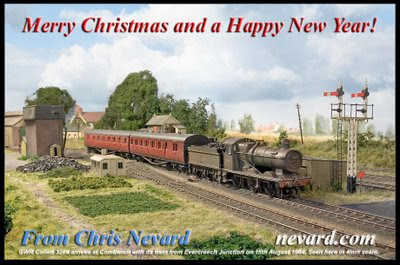 To all the readers and viewers who have passed on support and nice comments over the last year about my miniature bodgings and meddlings.
May next year push the boundaries and that all important fun factor one stage further!
Chris
Posted by Chris Nevard Model Railways at 6:26 am No comments: 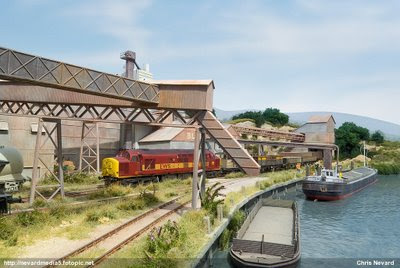 Furthering Cement Quay's look before its show in Guildford on the 17th Jan 2009, the other day saw the purchase of the highly acclaimed Noch Gras Master from the excellent Gaugemaster at Ford near Arundel.
The Gras Master is a useful tool for applying static grasses to model layouts and dioramas, the 'static' feature making the 'grass' fibres stand upright as they land onto the surface of the layout.
Tests so far have proven very effective, as hopefully the pictures here will demonstrate with the Noch fibres blending in very well with the existing Silfor grass matting. 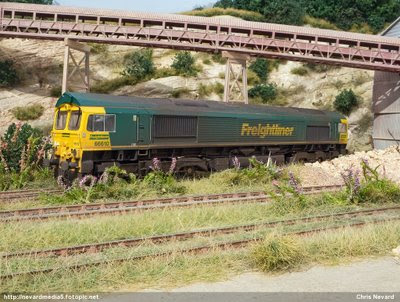 I think the days of ground foam scatter replicating grass rather badly from that well known manufacturer beginning with 'W' and others are truly past their sell by date on the realism stakes.
However this new found realism does come at a price, with the recently introduced Gras Master 2 coming in at just over a ton. To put it into proper perspective though, it's only the price of a couple of new locos and most of us have too many of those anyway, so I consider it money well spent - it doing far more for your layout than those new locomotives.
Posted by Chris Nevard Model Railways at 9:47 pm 2 comments:

Email ThisBlogThis!Share to TwitterShare to FacebookShare to Pinterest
Labels: Grasmaster 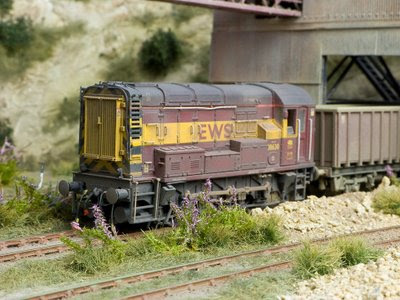 In preparation for what will be Cement Quay's first outing in a year at the Guildford Show on Saturday 17 Jan 2009, a little time yesterday afternoon was spent upgrading things a little.

A rummage on our lawn sourced some moss which I felt had some scenic potential. After few hours in the airing cupboard overnight to dry out, little bunches of the stuff were stuck down then sprayed with a PVA/paint and water mix to strengthen, preserve and darken the colour a little. The tips are then painted mauve to look a little Budliah/Rose Bay Willow Herby using some cheap acrylic from Tesco. 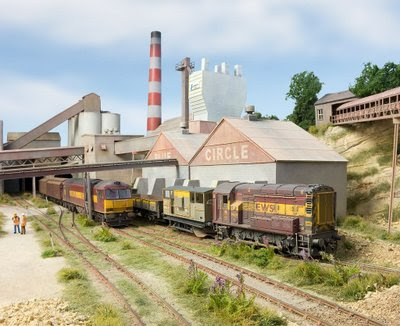 Some of that modelling is very wonky from this angle - ah, it's all just slipping into the Severn, well that's my excuse anyway.....
Posted by Chris Nevard Model Railways at 8:40 am 2 comments:

Layer stacking in Photoshop CS3 for increased depth of field 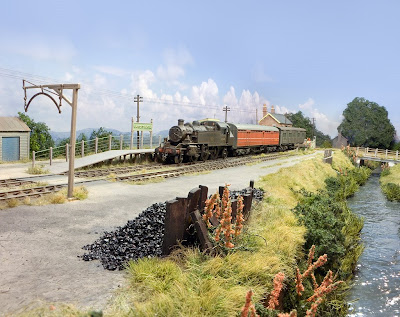 I had a bit of spare time overnight, so read up on the rumour that similar effects to Combine ZM for bodging an increased depth of field can in fact be done in Photoshop CS3.

You need the 'extended version', and you might find this link useful
http://wiki.panotools.org/Image_Stacking

The link above mentions 'Smart Objects", which for my tests were quite the opposite (though I'm sure everybody else will do better).......

The below worked for me and tests so far have proven to work well for for images where you only have two layers (which to be honest is fine for many pictures, more will work I'm sure, but will of course increase the amount of selective layer deleting needed). It also had the advantage in that CS3 lined up slightly misaligned images (ie when a bean bag was used rather than a tripod which can result in rotational errors) somewhat better than Combine ZM. You do have to manually delete the out of focus bits from the top layer using the eraser, this does mean that you don't end up with those odd looking blurred areas where Combine ZM didn't know what to do (Combine ZM does the whole caboodle, but for me has been a little hit and miss depending on shot).

Leave to chunter away for a minute or so, you then get a multi layered file which can be saved as a PSD or layered TIFF.
With the eraser tool (E), ideally with a soft edge delete the out of focus bits from the top layer (this is actually quite quick).

Save as PSD or flatten and save for the web or whatever.

Unlike with Combine ZM you don't lose EXIF, colour space and an end up with an odd 96 dpi screen res (300 would be a better default) which you might need to add again. It also works in 16 bit and straight from the camera RAW files (which 'ZM won't do) which a bonus too.

The shot above taken on a Canon G9, was combined from two shots (one focussed on the foreground and one one the engine) with the camera resting on a bean bag, which in turn was resting on some stock boxes. Previous attempts with Combine ZM created some odd misregistration results on the left hand side, however, using CS3 as above worked perfectly, the stack creation twisting one of the images slightly to solve the previous problem. The whole fiddling about from RAW file selection, through grading and selective deleting of out of focus bits right through to resizing for web took around 10 minutes.
Posted by Chris Nevard Model Railways at 7:53 am No comments:

Back to the Future with 35mm Film! 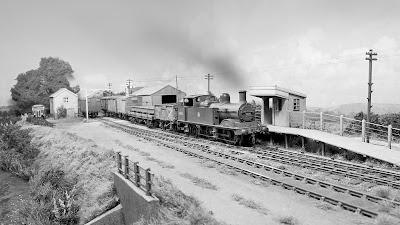 Late last week, in this world of 'only digital will do' I was starting to feel rather sorry for my old much film starved Nikon FM 35mm film SLR gathering dust on the office shelf. A day or two later, & much to my surprise I was still able to buy a roll of B&W film called Ilford XP2 - which can be processed down the local 'Kwikkysnaps' on their C41 processing line.

In the 'old days' I'd have processed my own film at home, but of course in this brave new world we live in, like many ex darkroomers, my redundant processing gear is likely to be lining some landfill site in India or other foreign clime - illegally dumped courtesy of our law abiding councils - or so we are led to believe if we take notice of the popular press!

OK, back to the all impor 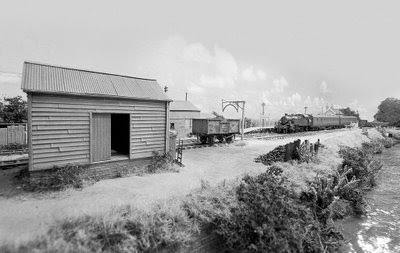 tant film, the camera back opening almost by magic as the hungry outmoded technology grabbed the 35mm canister off me. The lucky subject of the old girl's attentions would be Catcott Burtle, my new layout/diorama. Soon I was snapping away with the reassuring rasp of the manual frame wind on and unmistakable ker-thunk of the shutter going off - 38 times in total, remembering of course that you can always squeeze on a couple of extra shots onto a roll of 36!

The following day the roll of film was dropped in at the local lab and after a coffee at Starbucks I ventured home with some strips of processed negatives for the princely sum of £3.50.

Rather than being totally analogue, I decided to merge this 'old tech' with 'the new' and digitise the files with a scanner and 'process' them in Photoshop, of course the simpler option would have been for the lab to make me up a CD! That's just too easy! 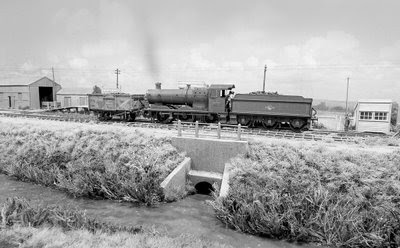 In the 'olden days', after wet processing the resulting prints, it's likely you'd have used Indian ink to retouch the odd white spot or scratch, now of course we simply use the various retouching tools in Photoshop with great effect and speed. We can then prints them off at home on the ink jet or post them to the internet. Of course, the other option would be just to get prints made at the time of processing - dust specks and all! Nah, that's just not me, that’s far too easy! 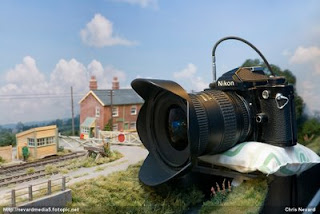