When steam goes in the wrong direction 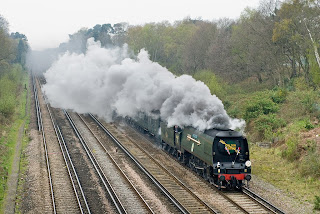 In the good company of RPG members Mr Wright & Mr Brunt, 34067 'Tangmere' successfully hides the Queen of Scotts rake of vintage carriages, as it blasts through Walton on Thames with a private birthday charter from Weybridge to Canterbury on Saturday 19 April 2008.
Posted by Chris Nevard Model Railways at 8:42 pm No comments: 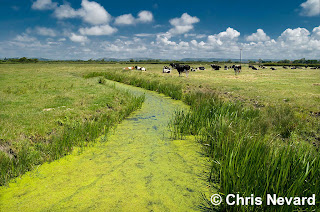 Canon G9 review. As long as you don't expect this camera to perform like a DSLR, for a small carry everywhere camera it's great. Saying that, with careful technique and with the right subject, shooting RAW at 80iso comes pretty close. Build quality is quite assuring with the cool metal body. The lens is the weak link I imagine, just have to look after it I suppose, after all it is an electronic item not really designed to be thrown about like a football. My fear is that I might turn the camera on whilst it’s in my pocket, Would it break? Or would it simply not extend the lens with some kind of built in protection? I’m not trying it out.

If you want to be serious with it, Adobe RAW in CS3 does a very good job removing the slight chromatic errors towards the edge of the field with high contrast subjects. The output to 400 iso is very manageable if shooting RAW, the Adobe N/R being very effective in controlling excess noise without losing too much detail. OK, it won't compare to a DSLR but a tiny sensor is never going too. The images, especially at the lower ISO settings do have a nice quality about them, with well rounded tones, colour and white balance.

The real bonus for me (I’m old school, I like total control here) is easy to use manual exposure control backed up with the live histogram so one can keep and eye on those all important highlights. If you do blow them in an important area, when shooting RAW the Adobe converter reclaims lost information quite well – better than I thought it would after reading the review on dpreview. Being able to set a custom white balance off a white sheet of paper is very useful too when shooting JPG, which offers less post production adjustment than with RAW.

Downside, well, very few as long as one understands the limits of a small camera like this (not as small as some, but on par with a compact 35mm film camera – remember them?).

The screen, wonderfully large and sharp, my only grip is that it is far too saturated and contrasty, leading one to believe that shadows might be clogged and highlights blown when in fact they aren’t. I’ve learn to rely on the histogram when reviewing images on the screen, after initially not believing it. Not the end of the world now I understand.

If shooting action or one needs high iso performance I’d be using a DSLR, there’s no argument there, it’s silly to think a camera like this is going to be anywhere close to a DSLR in this respect.

If I had the chance to wind the clock back and had the option to decide whether to purchase this camera based on user experience gained, I wouldn't think twice about buying it again!!
Posted by Chris Nevard Model Railways at 11:17 am No comments: 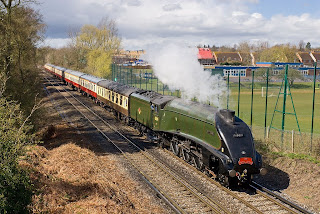 Captured between rain showers, LNER A4 Class 4-6-2 no 60019 Bittern, powers away from Virginia Water with a private charter Euston-Staines-Guildford-Redhill-Victoria) on Friday 11 April 2008.
Posted by Chris Nevard Model Railways at 3:58 pm No comments: 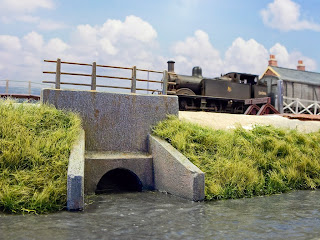 This morning's work on Catcott Burtle(about 45 mins), saw the rhyne bed painted a darkish grey emulsion colour, then coated with a thick layer of PVA (first of about 4 or 5 coats). A couple of patches of Silfor were added to gauge effect. The area with the rails etc is still bare cork with the grey/red primer mix, the ground cover and ballasting yet to be done (modelling clay for general surface including siding, fine granite or such on the 'mainline'.). 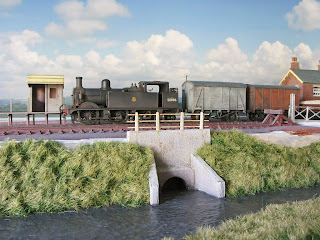 PVA is just white wood working glue, I guess you can get it world wide. Some brands dry clearer than others. I use the one in the dark green bottle, either Evostick or Unibond (cannot recall, not being anywhere near the bottle at present - well the glue bottle anyway). I've often thought that that varnish is too shiny (odd thing to say I know), it showing up any dust present and being more the colour of best bitter rather than mucky water. I've never seen rich blue water either apart from in the Med, around the UK it's gerally shades of grey with hints of brown, depending on how much mud is in it (the nearby Thames the other week was the colour of tea with all the mud in it after the heavy flooding rain). Any blue, will just be the reflection of a blue sky.
Posted by Chris Nevard Model Railways at 1:37 am No comments: