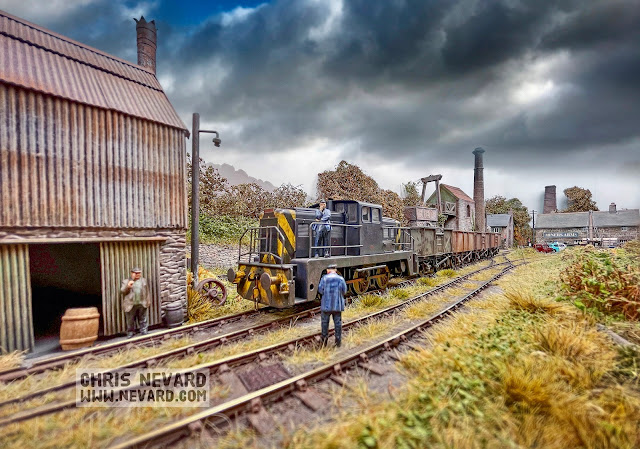 It’s ‘Front End Friday’ at the colliery, even though we only have a view of Tony’s rear end as he grabs a photo of Deliberation Dave stood on the veranda of a rather grubby diesel shunting loco.

I’m not sure the full reason behind the photo opportunity, but Deliberation Dave has a pen pal down under called called Nervous Ned. They regularly exchange letters and photographs of themselves (fully dressed by the way, I know many of you have smutty minds) stood on engines or in bars clutching pints of beer - though beer is unusually missing here - but it is the workplace I suppose?

As usual, that’s Harry the Hammer stood on the left, and as usual he’s almost at the end of his shift - that always being the case, irrespective of what time of day it is.

Back to reality, this shot is a test using ‘Er Indoors’ new iPhone 13, I being keen to see what such a fangled tool could do. Mine still being a Nokia 3210, which is rather like a cockroach or Hammant & Morgan controller, which we all know will survive and apocalyptic event, even though they’ll be useless for their original purpose. Btw, ‘Er Indoors has yet to comment on the toy chuffer photos that have appeared on her new toy is if by magic, which is slightly ominous.

If you enjoyed this post, you can buy me a beer at www.buymeacoffee.com/Nevardmedi3

Posted by Chris Nevard Model Railways at 8:47 am