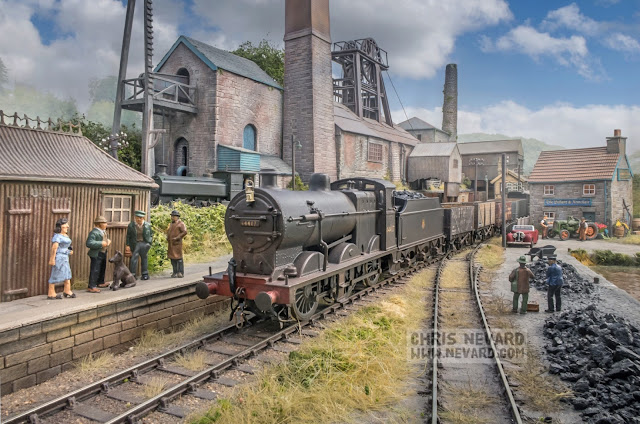 It’s Friday, and the moonshiner collective formed of Deidre, Terry, Rufus Hound, Shamus and Barry are off to Shepton Mallet for a day out visiting various pubs on route to hopefully strike up sales of their illicit booze. A move which I’m sure will be popular with cash strapped publicans, as long as the hooch doesn’t make their customers fight too much or simply go blind.

Celebrated posh but average photographer ‘Oh Dear Boy’ Ivan Locksmith accompanied by Kodak Keith, have just photographed ex LMS 4F No 44417 departing with a fresh load of coal destined for one of the Bristol power stations. Sadly the coal mined here isn’t the best, and not a patch on that shiny hard stuff from the other side of the Bristol Channel. Cue the Welsh cheers…

Over by the the pub, Farmer George after dropping Deidre Dinkle off with his throbbing tractor (he knows how to treat a girl), can be seen chatting to his brother. George’s brother is not only an identical twin, but also called George just to confuse things.

George’s mother and father at the time of the twins’ birth though it would be easier to give them both the same name, because there really is no way you can tell them apart. They even have identical throbbing green tractors. It’s rumoured that Deidre Dinkle is going out with both of them, unaware that they are in fact two. On the odd occasion she does see both of them, it’s usually down the pub after too much cider ,so simply puts it down to double vision.

And finally, if Deidre does marry George or/and George, how will this work out at the alter? This isn’t Utah after all, which I think is about multiple wives, not husbands? Hopefully some of my stateside readers can enlighten us.

If you enjoy these posts, feel free to send some new year joy www.buymeacoffee.com/Nevardmedi3

Posted by Chris Nevard Model Railways at 8:52 am