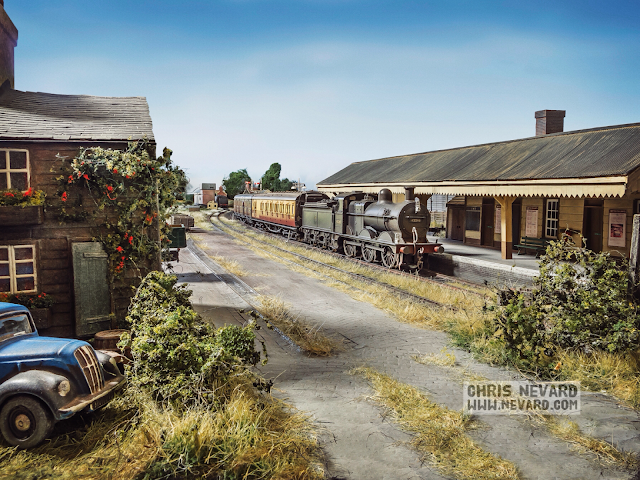 Much like this summer, the summer of 1959 was also ‘scorchio’. But unlike these days, we just called it ‘glorious weather’, with summer carrying on right in to October. In this photograph of Combwich station, no one appears to be out and about, but the arrival of the train here will no doubt change that.

In a few seconds, the only passengers, a family group of 7 on their annual holiday from Upper Thong, Yorkshire will alight. Though quite why they’ve travelled all the way to an unremarkable small town in North Somerset when they could have gone to Whitby or Bridlington I have no idea.

Although we cannot see them, the family are all ‘properly dressed’, despite the temperature being in the mid 80s Fahrenheit. The men and boys are wearing heavy tweed jackets, shirt, tie, and trousers made from horsehair, or shorts for those under 21. The fairer sex are trussed up in tight fitting dresses, hats and a thick hand me down cardigan “if it were good enough for yer nan, it’s good enough for you”.

They still have a few warm and rather dry corned beef sandwiches left and a large jar of uncle Frank’s pickled eggs. Father bought some rancid home brew, but that’s only for the men an older boys, the small children and women will have to drink warm and slightly sour milk. But that’s okay, we didn’t complain in those days, especially if from the Grim North where just experiencing daylight was considered a right royal treat.

Tonight they’re staying at Mrs Miggins’ Boarding House, with all the extended family sharing the same bed on a strict shift rotation. Mrs Miggins doesn’t want any nonsense though, everyone has to be back at the guesthouse by 8pm, and they’re only allowed to run one bath to share during their week long stay. Ah, the good old days…

You can buy the men a warm beer or the ladies a sweet sherry here www.buymeacoffee.com/Nevardmedi3

Posted by Chris Nevard Model Railways at 8:22 am