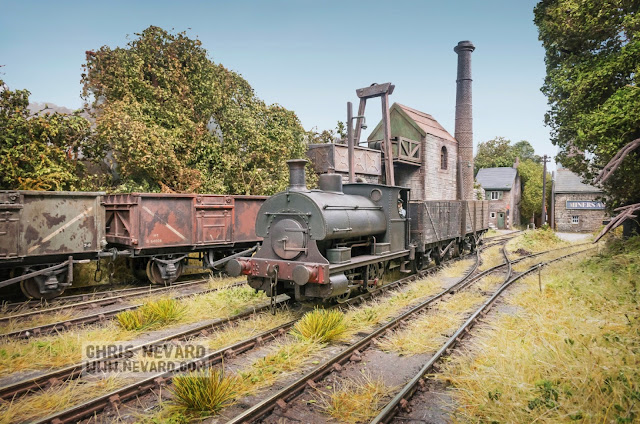 Apologies for lack of posts this week, I’ve been rather busy with location photography supported by borderline 2G cell cover and ‘hotel wifi’, which we all know is useless for anything other than sending a text.

Anyway, here we go; it’s Thursday morning deep in The Forest at Fountain Colliery. It’s a cloudless sky, and later on temperatures are due to hover around the mid 80s Fahrenheit, which means it will be more than a little hot in the tiny loco cab. But they’re tough at the colliery, so a wet knotted handkerchief over the head will suffice along with several cups of piping hot tea.

And later on, there is the pub over there in the distance where pints of warm cider or beer can be imbibed at shift end. This is Britain of the 1950s, ice is only something experienced outdoors (and inside for many) in the winter, and certainly something never enjoyed in drinks, unless you’re from the USA or very very posh and have one of those there new fangled refrigerator things.

These little scenes take quite a bit of time to create and photograph  - cheers 🍻 www.buymeacoffee.com/Nevardmedi3

Posted by Chris Nevard Model Railways at 8:24 am