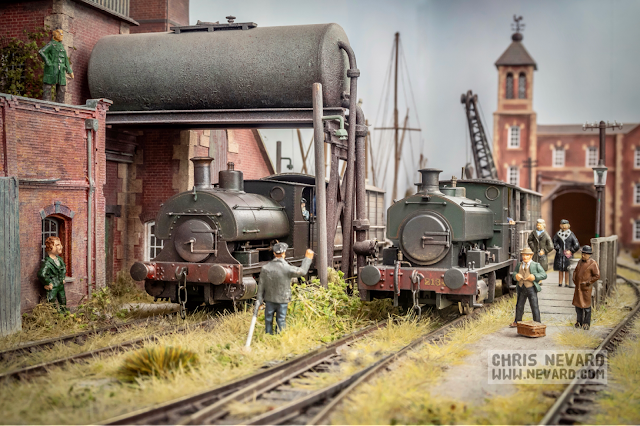 It’s Saturday morning at Brew Street, and time for the annual ‘rail race’ also known as ‘The Old Kettle Sprint’. This unofficial race which has been running yearly since 1946, involves 2 similar locomotives, each with a single brake van. The short trains have to race to the single line section behind the photographer, the first to the single section winning. But being of a similar power output, the two engines usually collide, this frequently resulting in bent metal (and plastic in this case).

Working from left to right, we note that bus fancier Nasal Nigel is back after a few weeks away at Her Majesty's pleasure, he having had one of his episodes involving his sticky flasher mac and a OO Triang Hornby type 3 at the local bus station.

Comical Ned (With the funny shaped head) pops out of the brewery distribution warehouse, having heard that Liz & Margo have been invited as formal adjudicators in the event of a draw. Ned has had a royal crush on these two ladies for years and years ever since having seen them in the highly acclaimed Picture Post.

As things get underway, Waving Wayne starts the race, though there has been a little confusion, because as we all know, he’s been waving nonstop since 1952 without a break.

Smooth talking local bounder, cad and ladies’ man, Terry Tuttle-Thomas-Smythe, and definitely not a ladies’ man, straight talking Barry Bullhead from The Ministry of Misery appear to be in charge of proceedings. This means that there will almost certainly be some foul play, possibly in the form of seized brakes, sudden loss of steam pressure or a drunken loco crew due to their tea being laced with some illicit 170% proof moonshine.

Meanwhile Liz & Margo are looking forward to the whole ghastly event being over so they can head for a few gins at the local boozer.

Feel free to support me with this regular nonsense, these little scenes take quite a bit of time to create and photograph  - cheers 🍻 www.buymeacoffee.com/Nevardmedi3

Posted by Chris Nevard Model Railways at 9:52 am