Looking back at the weekend show 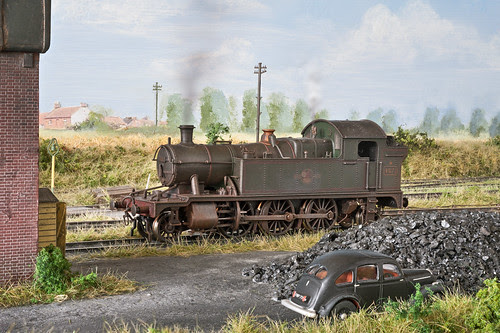 nevard_120123_45xx_DSC_1208, a photo by nevardmedia on Flickr.
As mentioned in previous blog posts, the Astolat Model Railway Circle 2012 Expo in Guildford was to be Combwich's last outing for a while pending a total re-wire to take some of the lottery as to whether the layout will perform or not. Luckily, and much to my surprise the old girl, which has now turned 30, presented very few problems other than a dickie frog polarity switch under one of the run around crossover points. On the odd occasion it played up, a little kerfingerkerpoken under the baseboard adressed the issue with most viewers probably not noticing the workaround.

Curiously, Combwich's baseboard alignment was the best it's been since the early 1980's, ever since then, despite the layout living in dry domestic atmosphere, the baseboard join which splits station area in half always leaves the most distant siding behind the goods shed with anything up to a 1mm drop at rail height when all other roads are in perfect alignment. This isn't really a problem, because it's more of less hidden from view and very few trains ever venture that far down the siding. My theory is that the environment at the Guildford show must similar to when the layout was orginally built; I always remember my parent's house being rather hot - actually it still is, and will no doubt get hotter as they get older which will be in harmony with the television getting louder!

The photo above is of the latest newcomer, in the form of an ex-GWR 45xx. I've already blogged about this loco which will in due course be renumbered, but this photo shows the sort of landscape that suits it best. The Bridgwater service provided good reason for its inclusion on Saturday, with it really looking at home trundling in and out of Combwich with a B-Set or pick-up goods. The photo was taken with north facing natural window light, its low angle highlighting many the textures in the scene and soft warm colouring that I like to get into my model making.

Posted by Chris Nevard Model Railways at 2:29 am