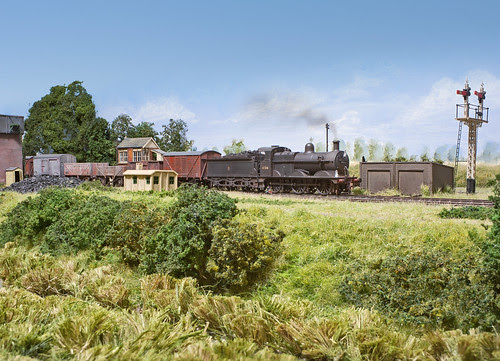 nevard_120128_combwich_DSC_1272, a photo by nevardmedia on Flickr.
Looking across a typical Somerset Levels rhyne, 43216 trundles in to Combwich with an afternoon goods from Evercreech Junction. August 1959.

I enjoyed operating Combwich so much at last weekend's local show that I've set it all up in the guestroom for a week or so to simply play trains. OK, setting the layout up is nothing new, but I don't normally add the fiddle yard due to space, however the temporary repositioning of the spare bed within the room has allowed me to set up the layout in its full operational entirety at home for the first time in several years.

So now the fiddle yard is full of stock allowing me to play trains in a proper fashion just like those rare occasions when the layout is on the road. Unlike at an exhibition, the control panel is now on the front of the layout which allows me to enjoys the punters' view.

Above is not an angle I've tried before, but I think it works, hopefully capturing the feel of a summer's days looking across the North Somerset bog half a century or so ago.

Photographically, it was just taken with a 10 second exposure under the single domestic ceiling light, the single point light source not doing a bad job at replicating midday sun. The top of the hand-painted backscene finishes just above the trees on the left and the signal to the right, so a little Photoshop was used to fill in the sky above and the cover up the magnolia painted bedroom walls.