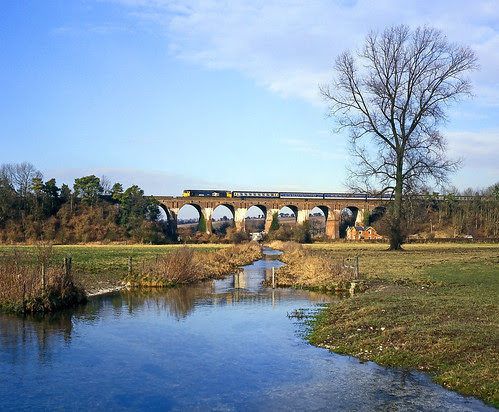 8702_hurstbourne-via_50042_p, a photo by nevardmedia on Flickr.
25 years on from this photo taken of 50042 running high across water meadows at Hurstbourne on  lovely sunny day in February 1987, we can still enjoy a similar view without having to get up from our armchairs. Googe Street View is a great tool, but it's often not possible to capture an almost identical angle.

'The and now', apart from the train, the only other significant change is that the elegant tall tree has now fallen, and I suppose could have been a casualty of the 'Great Storm of 1987' which changed much of the UK landscape literally overnight - this photo being grabbed prior to that of course.

Still comparing 'then and now', the water course looks more of less the same, albeit with less in the way of random old wooden posts. The pasture above would appear to have been nibbled, the same view now having alot more grass. This is probably just field rotation, suggesting that maybe the 1986/87 season it was used for animal grazing.