All up and running 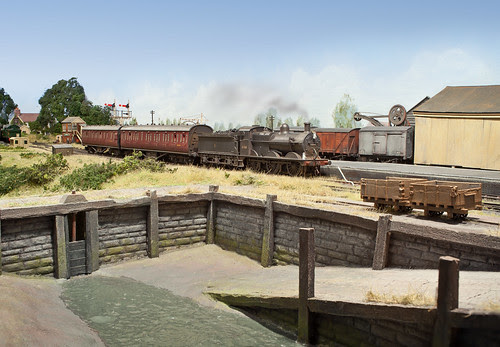 This afternoon, Combwich was assembled for an up and under prior to this weekend's show in Guildford. Much to my surprise, it ran pretty well first off, apart from a slight problem with a Peco polarity switch being a tad lazy - next job will be to dismantle the layout and ship it down to the show which is just a couple of miles away. Fingers crossed it will behave itself upon reassembly. We shall see!

The layout has for the last few months been stored vertically with the boards facing each other. I thought I'd stopped the cats getting in, but one of them has obviously managed to get inside, and in trying to escape pulled some of the Silfor grass matting adrift, a little PVA sorted that out. Luckily none of the buildings were damaged by the little darlings.

Here is a bigger version of the above photo.
Posted by Chris Nevard Model Railways at 9:13 pm