Guilty Pleasure - Dabbing with the GWR! 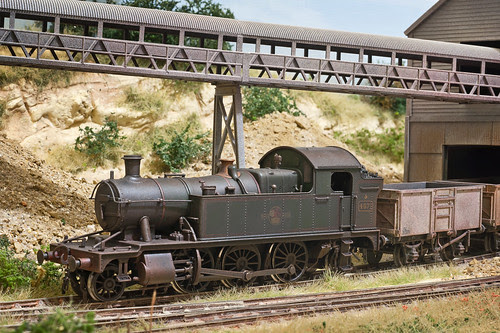 nevard_120121_45xx_DSC_1094, a photo by nevardmedia on Flickr.
A Bachmann ex-GWR 45xx after an initial weathering captured pottering about on Cement Quay Old Quarry Wharf. In due course it will be renumbered with etched plates once I have finally decided on a suitable number, which will probably a loco from Taunton Shed(?). I'll be honest to knowing very little about the GWR other than it was the arch enemy of the S&DJR and Southern Railway, but their hansom locos do have a certain charm even if is potentially dabbing with the dark side.

In my imaginary world, Combwich also had a service to Bridgwater, not to connect with the S&DJR at Bridgwater North, but with the GWR. For this service ex-Great Western motive power and trains were used, most usually a Pannier Tank or a 2-6-2 tank like this one on a B-Set.

As a guilty pleasure earlier this evening I started weathering up this delightful Bachmann offering for the weekend show, and whilst it won't have the etched number plates in time, it now blends in a little better with the rest of the trains.  It's also a really steady runner, something that is always a bonus on a shunting plank.