Fresh in from Kernow 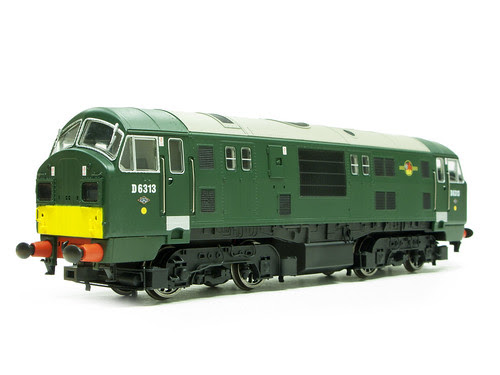 nevard_120125_class22_IMG_2312, a photo by nevardmedia on Flickr.
Yesterday morning I opened the door to the porch to find this rather well packed parcel from Kernow Model Rail Centre sitting there in the form of the much awaited Dapol Class 22 - a very useful small loco, especially for those that model railways half a century ago anywhere west of Heathrow.

I have yet to look at it properly, but was able to find a few moments to grab this snap of the compact little beast. Obviously the detail pack needs to be added along with separate panels that clip in below the body.

I may well renumber this loco, though I know that there were many variations so I could be heading straight for a huge web of nit-pickers  - even more than usual if I get that wrong with the number-obsessives. I did try collecting trains numbers once, it lasted for 1 about hour at Eastleigh station in the spring of 1981 before I got totally bored of what to me is a pointless activity - still, each to their own I guess! I have some good friends that collect loco numbers, so at least I now know that not everyone who does this is a nutter, but 30 mins at Tamworth Upper Level Station is enough to realise these good gentlemen are a rarity, but on the other hand, odd is interesting and cool - so, so what!

The Class 22, or North British Type 2 Bo-Bo were mixed traffic locos, but lack of reliability meant that they tended to find work on less important services and were frequently seen on demolition trains on closed railways, where if they failed apart from the crew becoming marooned, were unlikely to mess up any schedule resulting in irate passengers! These locos in real life were pretty unreliable and generally unloved, so they mostly appear in photos looking more than a little worse for wear frequently with tatty worn paint - a weatherer's dream to recreate! For me it's a great choice, being ideal for the sort of backwaters I enjoy making, its compact size not over-powering the the small layouts.

Whilst they only ever appeared on the SDJR after closure on demolition trains, one did briefly make an appearance at Glastonbury in 1964 on an inspection train - see this link. Something like that would make an interesting short train in miniature. Personally I can also see this loco being used on Cement Quay on the odd occasion I decide to back date the operation and of course it will fit in perfectly on Polbrock. All in all, a good buy! Well done Kernow and Dapol!
Posted by Chris Nevard Model Railways at 6:07 am