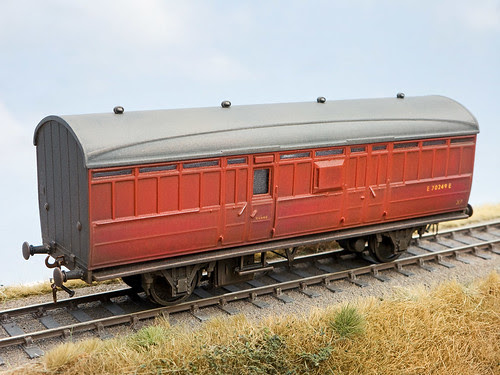 Microscale Kristal Klear used for the upper window lights rather than trying to cut out clear plastic sheet and insert into the recesses on the rear of the side mouldings.

To get the patina, after painting with Railmatch BR Crimson (aka carmine), the van was numbered with HMRS Pressfix transfers and then sealed under a thin coat of Railmatch aerosol Matt Varnish. Then, a water based mix of matt black and brown matt emulsion, diluted 70/30 with water and a dash of washing up liquid was slopped over and hastily wiped off with kitchen towel to leave the pigment in the groves. To get the slightly orange faded effect so often seen, some matt Humbrol signal red was drybrushed very lightly onto the raised surfaces.

The roof was treated in a similar fashion, using Humbrol matt enamels - initially dark grey, and then drybrush on with a lighter grey leaving the darker grey exposed around the torpedo vents and rainstrip.

Aerosol matt varnish was again misted on very lightly to seal the water based paint in and to produce a haze over the windows.

All that's needed now are brake and presumedly steam heating pipes on the ends.
Posted by Chris Nevard Model Railways at 12:47 am

Email ThisBlogThis!Share to TwitterShare to FacebookShare to Pinterest
Labels: chivers