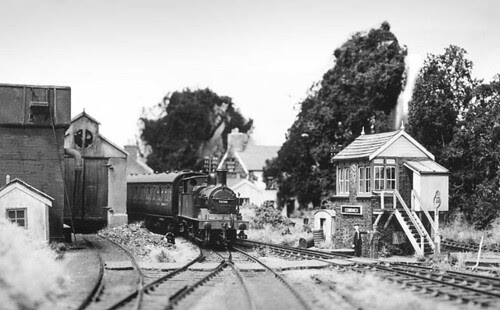 Combwich way back in 2002 mid-way through refurbishment after 15 years in my parent's loft
I think it's all too easy to be over ambitious, get carried away and take on a project that's far too big and demanding. At every show I get a beginner coming up to me wanting to know what I think about building a huge prototype layout - 'Caerphilly in P4' was the latest from a very nice chap who had never even seen a length of Peco. There is nothing wrong with this, but it's not a first layout project project even in OO - well maybe not in isolation or without the help of modellers who have been there done that. Sadly I have a hunch very few of these projects ever happen or even get past the planning stage.
Personally I like too many types of railway and could never commit to one big project because I would lose interest, so for this reason I'd rather have smaller projects that will support my my ever-changing whims and still get finished in a reasonable time. When I was younger I had a very puritanical view, but nowadays I'm far more realistic about the time I have available for model making and won't shy from utilizing many of the wonderful ready made bits and bobs we have now. Brewhouse Quay being a good example of this (and I've never had so much fun!).

In my case I lost total interest in the hobby for 15 years, but not full sized railways. However rediscovery of a mothballed Combwich in good condition in the old folks' loft got me all excited, and 10 years ago I salvaged it carrying on from where I left off and the layout is enjoying occasional shows now. If I was start over, it is not the sort of layout I'd do again, but I'm really glad I have it now and have no plans to sell or burn it just yet. It would certainly never have happened without the help of my of friends at the Southampton Model Railway Society who showed me that a soldering iron could do more that torture daddy long legs.

There are lots of other hobbies out there, we don't have to force our selves if it doesn't work, after all most of us have to do things we don't enjoy, so the last place those things should extend to is 'me time'.

Any one for stamp collecting?
Posted by Chris Nevard Model Railways at 11:31 am