A Man Who Can 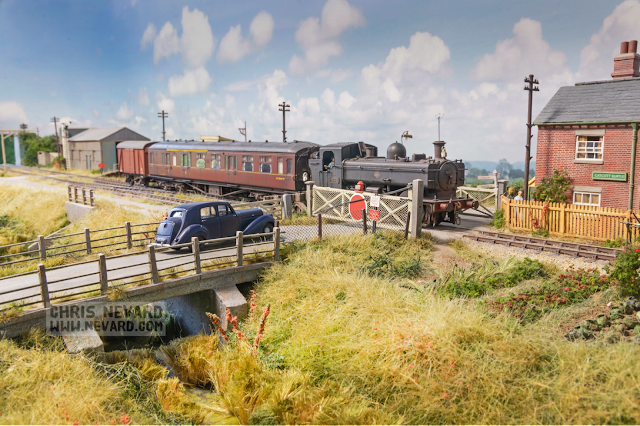 Thursday morning at Catcott, and celebrated ace railway snapper Ivan Locksmith enjoys any opportunity to feature his well-known Bentley in his railway photographs. It’s almost the same as the famous Bentley owned by the even more celebrated photographer Ivo Peters, but Ivan’s is a slightly lighter shade of blue and not nearly as shiny. This is Ivan’s photograph taken on that new fangled Kodachrome 2 on his even more fangled Nikon F.

Today the 11.05 from Highbridge to Templecombe is only a single carriage, and hauled by an ex GWR Pannier tank. The Western Region of British Railways are certainly making their stamp in this former Midland/Southern joint line by slowly downgrading things. Sadly it looks like the railway will close forever, but nothing has been confirmed yet.

Looking over at the crossing keeper’s cottage, Herbert Half Job Fugg, popular local rogue roofer and half-jobber, is chatting to crossing keeper Deidre Dando about her missing ridge tile. It blew off in to the rhyne in the foreground last October during one of those strong northwesterlies. Herbert will sort it for sure, but the repair will be in a different colour and he’ll only charge 30% more than Proper Job Pete from nearby Wedmore. Hopefully British Railways will do the repair, but 8 months on nothing has happened. But Deidre enjoys the chat with ‘a man who can’, even though he won’t be the man. Being a crossing keeper on The Levels can be a lonely job

If you enjoy these posts, you can join those kind souls who’ve supported me with this regular nonsense - cheers 🍻 www.buymeacoffee.com/Nevardmedi3

Posted by Chris Nevard Model Railways at 7:46 am