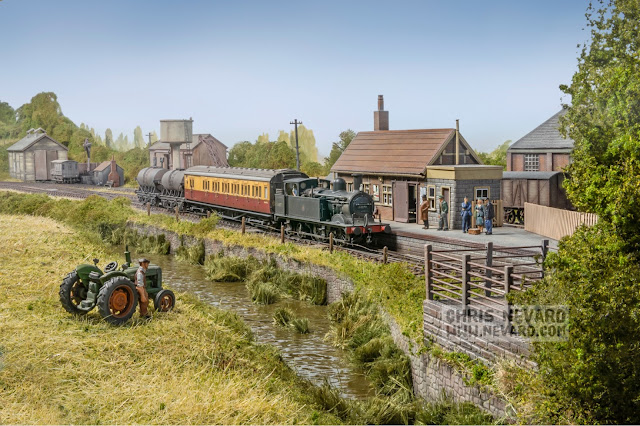 Another scene from that strange miniature parallel universe of 1950s little England. Farmer Piles looks on at what appears to be a former Midland loco with a single ex Southern Railway coach and a couple of milk tanks arriving at Hemyock. Deep in former GWR territory, this is a most unusual sight, and one that will almost certainly play havoc with many an enthusiasts’ inner Nasal Nigel. But if we look across at the platform, we see Barry Bullhead from the Ministry of Misery, Shamus O’Flatbottom, Derek, Clive and Beryl, so something dodgy must be afoot. Upon further investigation it would appear that the train is from the creamery at Bason Bridge, with the tank wagons being destined for the creamery here Hemyock just out of shot to the right. But why this wagon exchange? Any thoughts?
Posted by Chris Nevard Model Railways at 8:40 am