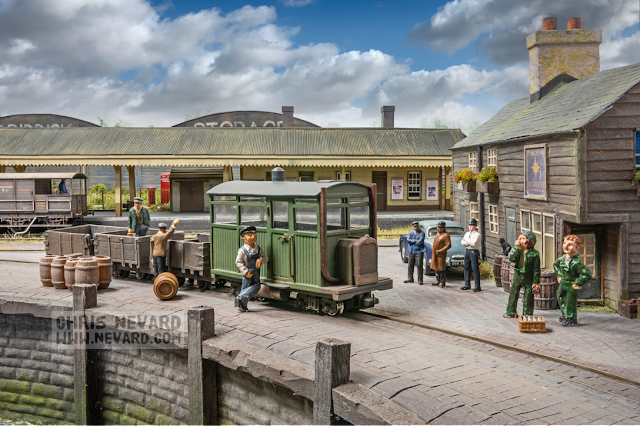 The narrow gauge tramway along the wharf hasn’t been used for many a year. But after decades of disuse, our little people are getting it running again using an old rail bus built mostly from timber, corrugated iron and the remains of an old greenhouse. It uses an engine and transmission adapted from an old petrol charabanc.

Gaylord Grip, former pro boxer and wrestler is in charge of the project and is aware that the little tramway must be profitable, so in association with the Star Inn have set up booze trips up and down the wharf. Here we have the inaugural train being loaded up with casks of illicit hooch which will ensure all participants will have a great time, and one they probably won’t remember the following day.

But it looks like Barry Bullhead from the Ministry of Misery and PC Philip Fuzz have had a tip off, but in our miniature rose-tinted land of nonsense they’ll soon turn a blind eye after a couple of test runs with free hospitality on the little train.

As always, click, swipe, tap, lick, wiggle or whatever you do to enlarge. Help me to keep these scenes of nonsense going when I really should be doing something more productive www.buymeacoffee.com/Nevardmedi3 or https://ko-fi.com/nevardmedia

Posted by Chris Nevard Model Railways at 6:39 am