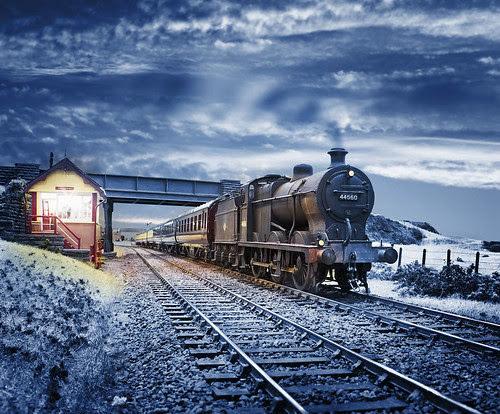 nevard_111120_warely_IMG_1980_MOON_WEB, a photo by nevardmedia on Flickr.
Under a crisp full moon, 44560 passes Kimble North Signalbox with the late service.

Captured at The Warley Show last weekend; the sodium light is unsuitable for serious photography, so rather than battle with the mixed sodium and daylight, a little Photoshoppery was used which primarily  involved removing the ceiling of the NEC and replacing it with a Mediterranean sky. I also decided to de-saturate and colourize much of the image to replicate moonlight. Cheating? Well of course, and what fun it was too. Of course the other option would be to simply turn the photo into black and white, but I hope you'll agree this is a little more fun!