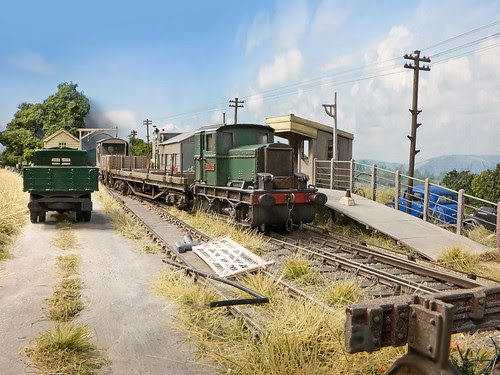 nevard_110101_catcott_IMG_1739_WEB, a photo by nevardmedia on Flickr.
Catcott Crossing, September 1966. It's just 6 months after closure and the demolition contractors have already started to dismantle the railway. Most of the railway buildings on 'The Branch' survived the demolition men, with many of then ending up in private hands, unlike the Bath to Bournemouth line which ended up losing well over half its stations to the swinging iron ball.

It's interesting now as to whether the same thing happened again whether such woeful vandalism would be tolerated - for starters there are few people who would turn down the chance of owning an old railway station these days, certainly there would be far more money in such than a pile of stone rubble. But of course in the 1960's everybody hated anything old, we wanted new and modern, after all it was the space age! Now 40-50 years on we see old buildings that avoided the developers' mallets outliving some of the appalling tat the defined much of 1960's and 1970's Britain.

I was only looking through a book of immediate post-war photographs of my home town the other day, and noticed just how much vandalism took place in the late 1960's, certainly down by the river and the main railway station. The book displayed some beautiful medieval architecture, the sort of architecture, which had it survived to the present day would easily place my town alongside the beautiful cities of York and Bath. Sadly now, due to likely backhanders at local government level a generation and a half ago my town will never achieve such status, but I'm sure it ensured a comfortable retirement for the already fat cats who passed the schemes. One can however take joy in the fact that many of these semi-legal abominations are now being demolished, it's just a shame that the individuals who instigated these urban re-developments are have mostly passed way and cannot see their demise.
Posted by Chris Nevard Model Railways at 1:00 am