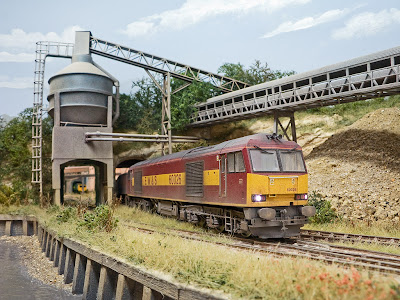 60026 arrives at Cement Quay Old Wharf with a and empty short rake of MFA high sided box wagons. The loco will uncouple and run around the train before propelling it under the screen for loading. Click to enlarge.

When photographing a model railway for publication it is generally desirable to replace the garage or office wall with some kind of wishy-washy pale blue, grey or white background in the event of the layout having no or a very low backscene. This I’m sure most will agree quite acceptable practice, for even 100 years ago such photographs would be tidied in such a manner by painting out part of the negative. The only way to avoid this would be to make sure that the camera always points downwards, which to be honest is likely to be a very dull experience for the reader.


In the olden pre-digital days, for those layouts without backdrops, large rolls of pale blue coloured paper or cloth would be suspended behind the layout during the shoot; this could prove quite a slow process due to space and the ability to light the cloth or paper evenly. These days we can use photo editing software to achieve the same if not better result allowing the photographer more time to concentrate on new, creative angles and good lighting.
This is all good news all round, but I’ve noticed increasingly on the printed page a tendency for all sorts of non-layout things starting to appear behind or even in front of layouts, frequently this is in the form of actual landscapes pasted in, making it possibly quite tricky for the reader to work out what’s really there - or more likely not. Personally I won’t take this route because is not about me and how clever I may of may not be at photo editing, but about showcasing the layout and all the hard work that’s gone into creating it. And then, what is the exhibition goer going the think when they finally see that their favourite layout in print doesn’t have Chatsworth House or the Yorkshire Dales really lurking in the background in full focus?
However, recently and possibly controversially I add a little ‘clag’ to steam shots, though I hasten to add that I always make available a set of photos ‘without’ and leave the editorial team and layout owners to decide which set of shots they want to use (which surprisingly has been a ‘yes’ to clag most of the time). It’s a bit like Marmite I guess, you either love it or hate it? And I’m sure most readers will know that the miniature locomotives don’t really spout out smoke, not unless 240 volts has accidently been zapped through them. Maybe I’m just adding what the brain imagines when looking at our miniature world, bar and the hiss, chuff and clanking noises? Comment!

What’s the shot at the top of the page got to do with it all? OK I admit it’s taken on my layout – but shot-wise it’s what I like to aim for with other people’s layouts if at all possible, especially if there’s a nice high backscene to allow a low angle like here. I can safely say that if you ever see the layout for real, pop your eyeball out and rest it on the edge of the layout (I’ll even give you a blob of Blu Tac if that helps) this is exactly what the naked eye will see. But, if your layout doesn’t have a nice high backdrop, I promise never to add the Himalayas or the Massif Central if ever I’m lucky enough to photograph your pride and joy!
Posted by Chris Nevard Model Railways at 11:41 pm