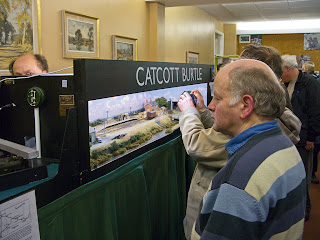 The Astolat Model Railway Circle Annual Exhibition on Saturday 15 Jan went very well indeed after a quick set up of only 17 mins from getting out of the car to running a loco. Much to my surprise the layout performed admirably as it did at its last outing at Railex in May 09, with the only 2 derailments of the whole day being caused by not placing stock properly onto the fiddle yard tracks in the first place - duh!


The newly installed working level crossing gates went down a treat with the audience, that and the sunflowers growing in the crossing keeper's garden (why bother with the trains?). A special thank you must go to Dave Renshaw who kindly gave up his day to assist running trains  - I hope it wasn't too stressful! 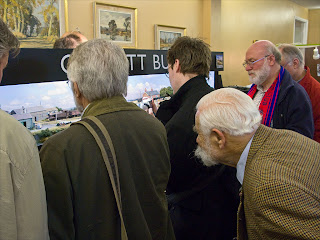 The tweeded gent to the left isn't an escapee from a society finescale railway modelling gathering,  but the charming Bob Symes who may be familiar to those who remember 1960's & 70's TV - Model World and Tomorrow's World. Amongst other things he also hosted 'Bob's Your Uncle' (Childrens Channel) in the late 1980's.

Enough from me, even though Dave R did all the work running the trains, it's now time for a pint. Next? Full steam ahead with Brewhouse Quay! Toot toot!
Posted by Chris Nevard Model Railways at 7:27 pm