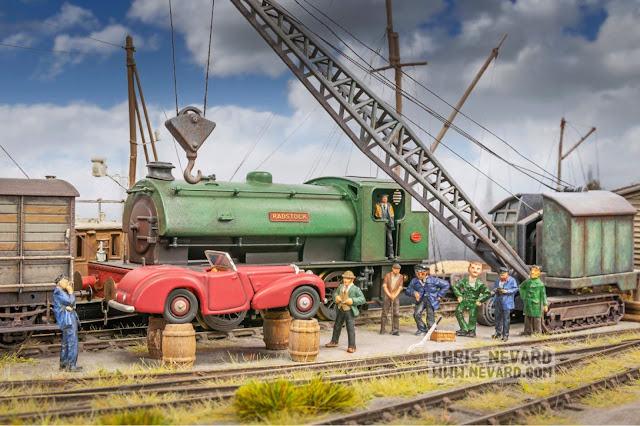 Sunday morning, and Terry Tuttle-Thomas-Smythe finds his beloved Triumph ‘babe-catcher’ balanced on some ale casks. The cad and bounder finally gets comeuppance for his regular cheating ways which are often at the expense of those closest to him. Many of our regulars have come to witness the amusing spectacle. Terry Tuttle-Thomas-Smythe (aka TTTS) demands the crane is used to lift his pride and joy off, but despite bribery with a crate of out of date bottled beer, the key for the crane has gone missing. TTTS will have to try harder if he wants a favourable result. From left to right… Derek would like to borrow TTTS’s ‘babe-catcher’ next weekend. Dennis (on the loco) wants a nice new shiny diesel. Doug wants a new shovel. Arthritic Arthur wants a new hip. Comical Ned (with the funny shaped head) would like a date with a lady who doesn’t come with a puncture repair kit. Clive would like a new notebook (he’s always on the darn thing and he’s been after an upgrade for ages). And finally, Nasal Nigel wants some well-soiled latex gloves, we’ll leave that bit there….

As always, tap, click or pinch, or whatever you do to zoom in.

Posted by Chris Nevard Model Railways at 8:36 am