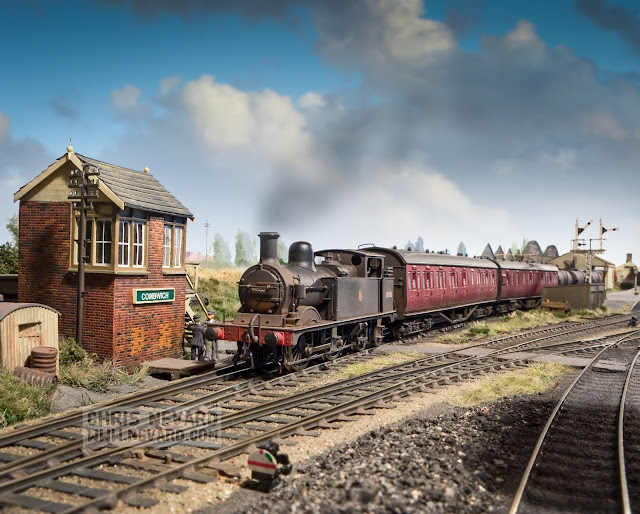 Wednesday morning, and here we have the 09.35 to Evercreech departure. A scene on my Combwich layout that I started around 1981. Apart from 15 years or so when it was stored and wrapped up in my parent’s attic, it’s been in my possession ever since. It’s much modified and enlarged since its original incarnation, but the track is original. The soldered construction is a little dated now, but it very much has stood the test of time (and no, I’m not going to relay it). Only tie bars for the point blades being replaced maybe 20 years ago.

As the layout has evolved it’s had several names, it was initially called Churchstanton, then Stogursey, and finally Combwich when I resurrected the layout around 1999 from its polythene wrapped incarnation.

Combwich never had a railway, but in my make-believe world it grew in to a town which warranted a railway, an extension of the SDJR from Highbridge. A ridiculous idea, but that’s half the fun of the parallel universe.

But people in the real world have been taken in, several years ago I received an email from a resident of Combwich saying that they know where the station used to be. I didn’t reply, for I didn’t want to spoil their joy. And whilst the layout is completely fiction, the last bit is completely true.

Posted by Chris Nevard Model Railways at 8:29 am