How to Build a Model Railway 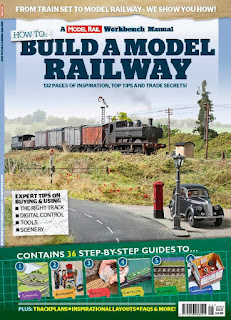 How to Build a Model Railway - New Bookazine!

I've been wanting to write about this for some time, but until now didn't have a clean graphic for the cover short of pointing a camera at my copy. Pathetic I know!

Putting it in it's simplest form spread across 132 pages it's axactly what it says on the cover which is 36 step by step guides about many of those things needed to build a great model railway. It covers all sorts from selecting the right timber, to ballasting, soldering or rewiring a Peco point for better reliability. It's true that many of the Workbench tips have been in print before in Model Rail, but here they all are under one cover, many with new photographs and now printed on nice paper with a quality wipe proof cover!

I've been railway modelling for 30 years, but still found an awful lot to swat up on especially now that there are so many new ways of doing those old chores. When at Railex, I passed a copy around to several experienced modellers, and much to my surprise most commented on what a nice and useful product it is - even for those with many years under their modelling girth. And whilst it even has appeal to those old duffers like me, it's the idea entry point for those new to the hobby, many of the tips saving time and expensive mistakes on that first layout.

It's priced at just £4.99, which I think is great value for money! When I first saw it I was expecting it to have £6.99 price tag, so for this reason alone it's been selling like hot cakes I gather. To get a copy pop into your local model shop, branches of Smiths or call 0844 8488872, but don't hang about because it well sell out!

Some have been asking about the cover layout; it's Model Rail scenic guru Peter Marriott's latest showpiece called Holcombe which will be making its debut shortly as a 'making of' in Model Rail shortly. Peter has a strange affinity for wierd foreign trains, so for the cover snap that's some of my tatty old heaps lurking on there!
Posted by Chris Nevard Model Railways at 6:00 am