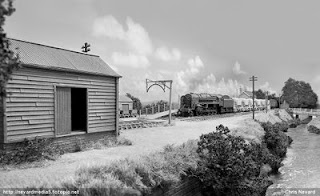 What could have happened? In real life, the GWR Radstock to Bristol route closed due to a landslide in the late 1960's. Imagine though, if the landslide had happened a few years earlier which resulted in the S&DJR from Radstock to Highbridge (with a reversal at Evercreech Junction) remaining open for coal, cement and stone traffic? We can dream!

The picture. Riddles 9F 2-10-0 No. 92224 clanks through the crossing at Catcott Burtle with Cement train from Westbury to Portishead (via Frome & Radstock) on 5 September 1964. That's the fiction, in reality, the 9F started life as a Hornby 'Evening Star' which has been converted to loco drive and extensively detailed. The 'Presflo' wagons are from ancient Airfix kits.
Posted by Chris Nevard Model Railways at 5:48 am