A bit of nip and tuck 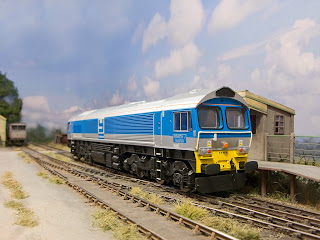 On the modelling bench, a Hornby (ex Lima) Class 59, 59005 'Kenneth J Painter'. Hornby have sadly made a hash choosing the prototype to represent, so irritatingly, I'll need to modify the lighting clusters on the front along with other general detailing. http://nevardmedia.fotopic.net/search.php?txt=59005&t=p . Luckely I won't have to disturb the blue paintwork, getting a match for that might be tricky, silver is no problem matching in though. The baffle/plough thingy in the front will need to be fixed to the body rather than bogie too - simple enough. It's either that or going for the Hanson livery, which would be correct for the Hornby body. In the end I fear that cutting up a little plastic will be easier than trying to create Hanson paint job and sort out a Hanson transfers - so 59005 it is!
Posted by Chris Nevard Model Railways at 12:20 am