It's all about me! 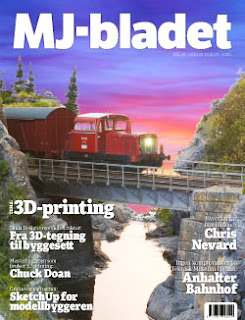 This post is all about me; it's not often that one gets ones name on the cover of a magazine so I feel quite justified in shouting about it.

MJ-bladet is a rather nicely produced Norwegian model railway magazine which showcases the very best in Scandinavian railway modelling, and unlike the UK model railway press has an eager audience for model railways from outside their own country.

In the UK for some some reason whenever a British model railway mag features anything across the pond, the editorial teams get hunted down and viciously threatened by middle aged soap-dodgers who still live 'with mother' and refuse to believe that railways exist anywhere else in the world. This is a tad odd, because railway exhibitions frequently have guest layouts from the other side of the channel that draw an appreciative audience. Sadly though, these same people don't want to see continental modelling in print, however good gracing the pages of the mainstream UK modelling press.

Anyway, this post is unashamedly all about ME, so whether you like it or not I'm going to tell you all about why my name is on the cover! Back in the spring, Practical Photography magazine asked me to write a short article on photographing toy chuff chuffs as well as showing off some of my more recent better pieces of photography.

Unlike in the UK, where we only have the command of 'Office English', 'US English' and to a lesser degree now those early evening soaps have all but vanished 'Oz English'; in Norway there is a market for magazines not only in the mother tongue, but also the English language Practical Photography being sold in many Norwegian newsagents for those that are proficient in 'MTV English'. Despite this worthy UK export, toy chuffs chuffs in a photography magazine is likely to miss its key readership in Norway (and in the UK for that matter), so the top chaps of the MJ-bladet editorial team sought permission to reproduce the article. And what a cracking job they've done, the reproduction is spot on and the design very simple, stylish and only using big bold imagery. They have also used a couple of extra shots not seen in the original article which adds another dimension.

OK, that's it, I've blown my own trumpet enough with this BLOG post, so much so that I might not be able to get through the door later due my briefly over-inflated ego! I'm sure though it will soon be deflated with a barrage of private hate-anything-that-isn't-British-emails from those dreaded soap-dodgers that are always first in the queue at model railway exhibitions.
Posted by Chris Nevard Model Railways at 6:06 am