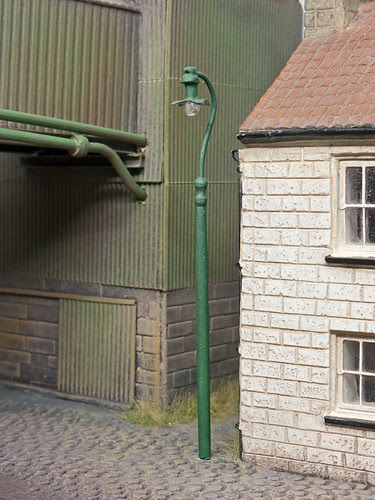 nevard_110817_BQ_IMG_0835_WEB, a photo by nevardmedia on Flickr.
A spare hour yesterday afternoon produced this scratch-built art deco era electric street light based on ones seen in Weybridge Surrey. The underside of reflector on the real lamp would have a mosaic of mirror glass like on a glitter ball - obviously too small to model.

Looking at old photographs in the Weybridge and Walton on Thames, area they appear all over the place in 1955 Francis Frith photographs, and I remember seeing the tungsten versions as modelled here within the last 10 years locally. Now they have modern SOX sodium units in place, but thankfully still have the swan neck and are painted mid-green.

I'm guessing that before electric conversion (in the 1920/30's?) they could have been gas, and would have probably featured the familiar cross bar for the lighting up man to rest his ladder on.

The problem now is that I want to make some more, a simple enough job, the base is carved plastic rod, the neck brass wire, the reflector aluminium from a beer can, and the bulb a little piece of clear styrene from the sprue of some window glazing.
Posted by Chris Nevard Model Railways at 9:38 am