nevard_120814_CDFBDS_DSC_8156, a photo by nevardmedia on Flickr.
We've been in France for a few days - I'll never complain about UK beer prices ever again!
But whilst the family went and did family stuff, I managed to excape for an afternoon to have a spin on the metre gauge Chemin de Fer de la Baie de Somme line about 60 miles south of Calais.
I rather liked this railway because it hasn't been over-camped up like so many British lines and The French have a relaxed view about walking around the trains relying on something we sold off ages ago called 'common sense'. We traded it for having to look after people that have sold their brains on Ebay or car boot sales, when really natural selection should have been be alllowed to take its course.
The diesel loco above which looks like it was designed by Fisher Price, is certainly no toy, when it's diesel electric transmission (read Geoffrey Nickson's update below) it given some welly it sounds like something much bigger, its straight 8 cylinder engine having a hint of 'Deltic throb' - wonderful! 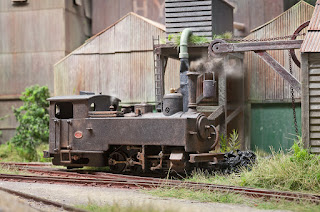 Right: This little trippette to foreign climes has made me look at this little freelance modification of a Bachmann Zillertalbahn loco I undertook a few years ago - it's now quite French looking with the long deepened tanks and modified cab.

Smart types will note the rear pony truck missing, just like the WHR Russell did in the 1950's when on the Isle of Purbeck. The reason here is the same, some of the Arne Wharf curves it was snapped on here are stupidly tight. One of the joys of freelance 009 - nobody can tell you it's wrong and alot of fun can be had, the only history book being the one in my dreams after far too much cheese, beer and curry, but not in France becasue it costs too much.
UPDATE, Monday 20 August courtesy of Geoffrey Nickson of Voie-Libre mag fame I've a little more info regarding the narrow gauge diesel, it would appear that I was given duff info by the chap at the station, though the chances are that it was simply lost in translation though! 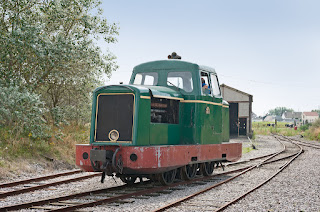 'Just one remark: our "Fischer-Price" 351 & 352 diesels are not diesel-electric, but quite basic diesel-mechanical. The slow-running straight 8 is from Willeme, an erstwhile manufacturer of lorries that used to be very popular in France in the 50s and 60s (Jean Gabin drives a Willeme lorry in the 1955 feature film "Gas-oil", by Gilles Grangier.)
Willeme diesel engines found their way all over the place, including narrow-gauge locomotives and electric generators. Recently, we were so fortunate as to lay our hands on a second-hand Willeme engine which had run just 400 hours since built new: it used to power a generator at the French atomich research plant in Saclay near Paris! (and, no, it ain't radio-active!). It will be used to re-motorize our N° 301 diesel, which is deep storage and a little different in appearance to 351/352. Geoffrey'
Posted by Chris Nevard Model Railways at 6:00 am