nevard_130319_RNAD-99HP-B-D_DSC_4907, a photo by nevardmedia on Flickr.
On the build review workbench today for Model Rail a 3D printed narrow gauge RNAD 99hp Baguley Drewry by Narrow Planet. These perky little locos were in use at the MOD Dean Hill complex until recent times on the military narrow gauge network that existed there.

For more info, go to http://www.narrowplanet.co.uk/

A full build review will appear in Model Rail shortly.
Posted by Chris Nevard Model Railways at 9:37 am No comments: Links to this post 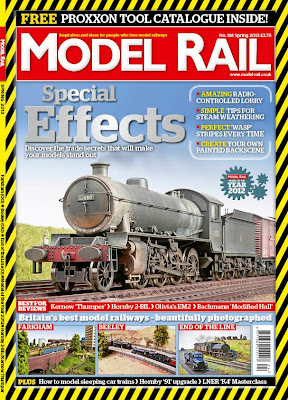 Model of the year results

Features:
All aboard the night train (sleeping car services)
Masterclass LNER K4
Top of the Bil

Workbench:
Weather without an airbrush
Make a pond
Improve Hornby's 91
Take the sting out of wasp stripes
Build 3-D printed kits
Paint your own backscene


Posted by Chris Nevard Model Railways at 11:33 am 3 comments: Links to this post 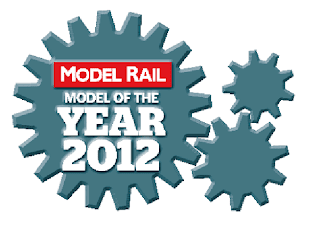 nevard_130317_PGCH_DSC_4882, a photo by nevardmedia on Flickr.
As part of converting Polbrock into Polbrook Gurney Colliery, sadly the level crossing had to go, the higher level of the new adjacent headshunt and sidings rather negating its usefulness.

Luckily removing the checkrails and picking out the Das modelling clay the road surface was metalled with was an easy task, with ballast taking its place in due course and maybe a small foot crossing from old sleepers to allow access to the halt.

The pub will remain 'as is', despite suggestions that it should be renamed from the 'Pedant & Armchair' to 'The Miners Arms'. The 'Pee and Aee', as it's called by its regulars provides a useful place for those irritating people we all come across at shows and internet forums, giving them somewhere to go during the week when not in care and when the forums fall over from time to time. 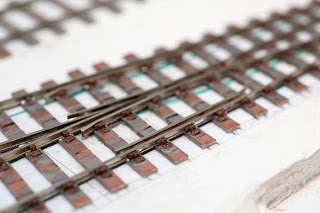 Also today, a couple of hours was spent applying cosmetic chairs to the new bullhead rail/copper clad built point that links BR with the colliery - a fiddly job, but one that is important seeing so much effort was put into the original Polbrock track work which uses C & L components.

With time being so short before RAILEX at the end of May, I was tempted not to do this to save time, but the couple of hours required to file the chairs down so they could be superglued onto the copper clad sleepers was well spent I think.

Regulars to this blog, will notice that yet again I have not been posting here quite as much, this is not due to lack of activity, but simply down to the fact that these days I don't sit in front of the computer quite as much twiddling my thumbs. However my Facebook 'Like' page at www.facebook.com/chrisnevard gets daily updates that don't take as long as writing a blog post, because such can often be performed from my mobile/cell phone when on the fly, many of which are small progress reports on various project that maybe don't warrant a whole blog update.

You: Blogger, the machine that drives this blog has made it tricky for blog interaction from you the reader, with silly anti-spam measures which require clever and highly convoluted skills to work out a puzzle of random letters and numbers before any comments can be posted. Facebook however, is a lot simpler, if for some reason you want to comment on some of the drivel I post, get down with da kidz if you're not already. and 'like' www.facebook.com/chrisnevard

Posted by Chris Nevard Model Railways at 8:47 pm 8 comments: Links to this post