I have just heard that 20119 was sent to Booths in February and has since been broken up. A sober message, in that we need to be aware that just because an engine has been saved from the cutter's torch and placed into preservation that in itself is no guarentee of its future. http://trainstoday.fotopic.net/p56827264.html 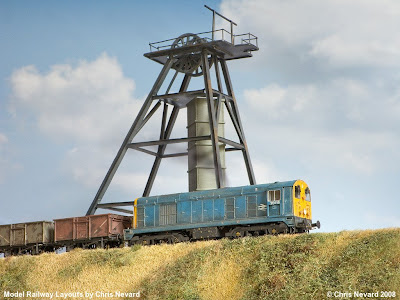 The Balony: Back in 1985, this was the scene as the wind whistled through the recently stripped down head gear as ‘chopper’ 20119 trundled past with a few empty open 16 tonners. These wagons would soon go the same way as the mining industry as imported coal loaded into high capacity wagons would change the look of the British coal train forever.

The Model: 20119 which until recently was preserved at Barrow Hill (see above) is a renumbered, painted and weathered Bachmann Class 20 using dry brush techniques, glass fibre brush and washes. The wagons are much the same – also from Bachmann. The headstock is a Hornby Skaledale one, a gift in exchange for some scenic work on another layout. This structure is likely to be modified and incorporated into a stone structure which will form part of a North Somerset Coal mining themed layout which is currently at the planning stage.
Posted by Chris Nevard Model Railways at 9:31 am