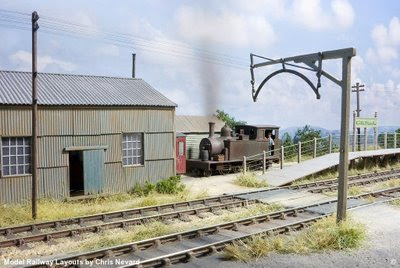 Click on the image to enlarge if you like…
The old bull: Captured here on early Ektachrome (with the characteristic blue bias) on the photographer’s Ilford Sportsman, we find Catcott Burtle (Crossing) in the mid 1960’s, and the preservationists have just moved in with an ex 2ft 6in gauge Cyprus Government Railway locomotive. Much effort has been spent beefing the line up to avoid this locomotive sinking into the bog - for it’s not that far off the size of a standard gauge locomotive! Many peat railways in the area only used lightweight Listers and Rustons, so it looks like they have their work cut out!
The real bit: Of course the above is only fiction, though Catcott Crossing did actually exist (the crossing keeper’s cottage still does, albeit hugely extended in recent years) it never had a peat railway (the peat deposits were a mile or two east of here) or any sidings. That parallel universe and pair of rose tinted bifocals are great things!
The dusty foreground around the siding was achieved with Humbrol Dry Clay by simply packing it in around the C&L track, then slapping some paint on it. To represent windswept dusty old cinder ballast I’ve tried plaster in the past, but that tends to go everywhere it shouldn’t - dry clay is a much easier option! Grass is a mix of Silfor Long Winter Pasture, hanging basket liner and Noch Static Grass applied with a Grasmaster. 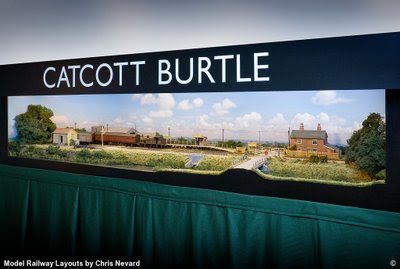 The backscene is an enormous photographic print made up from several snaps taken in the actual the area. I then merged them together in Photoshop and got the result printed onto sticky backed plastic which in turn was sprayed with Testors Dullcote to kill the sheen. A doddle to be honest, and alot better than anything I could dream of painting! The scale? OO.
Posted by Chris Nevard Model Railways at 9:13 am