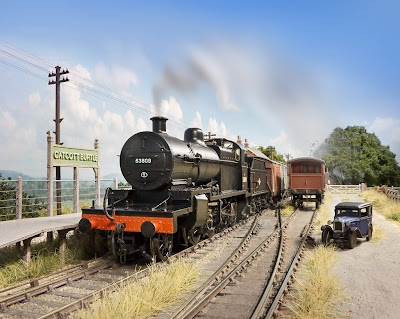 Click on the images to enlarge!
Bachmann's much anticipated SDJR 7F 2-8-0 has finally arrived at Nevard Towers from Hattons in Liverpool, and what a beauty she is too. I'll refrain from commenting in detail too much, because there are many merry souls who get out even less than me who'll no doubt keep the forums bulging over the next couple of months with stuff about the loco that you cannot see.
To me Bachmann have captured the look of this iconic heavy freight loco supremely well having gazed at photographs of the real thing for 30 plus years. In that period I've often thought about building a kit of one of these, but like many there is now little need. 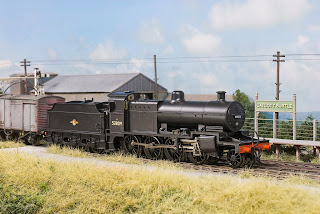 As a nice surprise, Bachmann have added the familiar Whitaker token exchange apparatus to either side of the tender – this was missing from the pre-production model seen back in the summer at their press and trade open day. Thoughtfully they have included what looks like a couple of spares of this in with the detail pack; these might make their way on to another one of my engines in due course.
So the loco can negotiate set track bends, the tender to loco gap is rather too wide for my requirements, but unlike Hornby this can be easily remedied by drilling an extra hole through the metal 'drawbar'. Toy train buffs from Tonbridge Wells will note that I have added the steam heating pipe below the front buffer beam - that is actually not required having examined photos after hurriedly adding the detail pack!
I have yet to run the loco due to lack of time, though I imagine it will be a little notchy as is frequently the norm with Bachmann steam outline locomotives; hopefully though a good running-in session will reduce this to a minimum with choice of controller as usual having an equally significant effect. 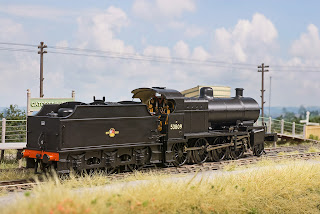 Whilst the loco undeniably looks stunning in its shiny black, in due course this little gem will go under the airbrush and dry-brush to add a little well needed ‘work-a-day’ patina. This hopefully will make it more in keeping with a freight locomotive as seen in the last decade of steam.
A couple of years ago, if somebody had posted this release on April Fools’ Day we’d have dismissed them as barking mad! But the last 18 months have seen everything change in this respect with all sorts of weird and wonderful unexpected prototypes appearing ready to run. So, roll on that Johnson 1P 0-4-4 with condensing apparatus next I guess?
Posted by Chris Nevard Model Railways at 8:54 am