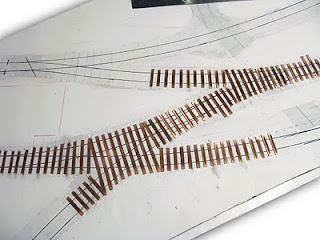 Just before the Xmas holiday I started to lay the track on Brewhouse Quay. The delay in getting the snaps here being due to that increasingly shocking excercise of actually interacting with people face to face (cue the H&S Executive for another new directive no doubt) rather than keyboard, eating all the wrong foods, drinking too much beer in foreign climes and probably in due course getting a dose of lurgy due to all public places being heated to suit the staff rather than the heavilly dressed public.
Initially the plan was to use ready made track, but after messing about with Xtrkcad it came apparent that I would not be able to shoe-horn in the track plan that I wanted in to the small area. And anyway, with nearly all the buildings being ready to plant I needed to have some challenge having not built my own track since Catcott Burtle in 2008.

The track as you'll see is traditional copper clad construction, but rather than using the more usual code 75 bullhead rail I'm aiming for that light railway/industrial look using code 55 flat-bottomed rail marketed by C+L Finescale for OO/HO. Code 55 is about as light a code as one can go in OO realistically to avoid earlier ready to run wheel flanges bouncing along the sleeper tops. 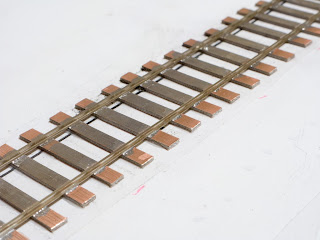 Seen here are the first few inches with rail laid, and those with keen eyes might just notice the destressed copper clad scratched to represent timber. Sleeper gapping to avoid a short circuit is just to the rear of the nearest rail so to avoid an unsightly groove when seen from the front of the layout.
When soldering the rail to copper clad sleepers, to avoid that tell-tail look often seen with blobs of solder on the side of the rail spoiling that flat-bottomed look, I'm pre coating the sleepers with a thin coat of solder and then sweating pre-fluxed rail onto the sleeper surface. Whether I add cosmetic rail spikes remains to be seen, for much of it only the rail tops will be seen protruding out of fine ballast or cobbles and some of the less recent ready to run offerings may just brush the spikes. Such can always be added at a later stage when the layout is nearly complete. 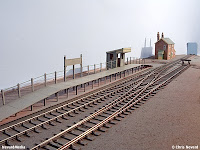 To the right and looking back to 2008, here we have Catcott Burtle after the C+L track was painted with various Halfords primers in preparation for ballasting.
The baseboard top is plywood, but seen above is what looks like a foamboard base - correct! To make track laying easier due to the fixed high backscene that that surrounds 3 of the 4 sides, I'm using a removeable sub baseboard which will then be fixed permanently into place once the more tricky aspects of tracklaying have taken place. In due course, ballasting with diluted PVA could cause the foamboard to delaminate, so to avoid the possiblity of that happening as long as the whole lot is painted prior to ballasting this will not be an issue. As with other projects I generally use a blend of Halfords red primer, grey primer and matt black misted on in varyoing amounts. One could of course use Railmatch 'Sleeper Grime', but Halfords bonds to the metal better, dries faster and can be bought from around the corner.
Posted by Chris Nevard Model Railways at 9:28 pm