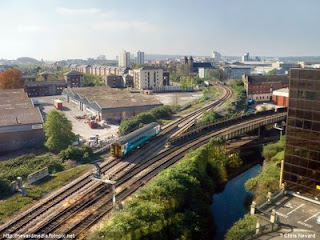 It's not often one gets an inspiring view from a cheapo faceless 'eurohotel', but for once the view out of the window of this Cardiff hotel was quite impressive with views in both directions of Queen St South Junction. The only drawback for me were the tinted wondows that didn't open! The tinting also had a slightly rippled effect making photography difficult and then there was the refection of the curtains onto the glass. The harzard of a converted office block I guess! Now, imagine the same view just quarter of a century ago 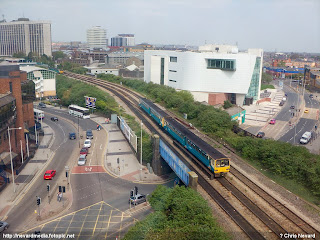 with class 37 hauled coal trains, or wind the clock back even further to the days of steam!

The first shot would make a cracking watch the trains go by kind of layout don't you think?

Click to enlarge.
Posted by Chris Nevard Model Railways at 7:37 am